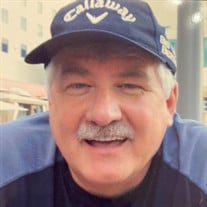 Michael Kevin Arthurs was born on March 9, 1957, in Dover, Ohio to Charles William “Bill” Arthurs and Maryann (Hilton) Arthurs. He passed from this life on Friday, September 17, 2021, in Tulsa, Oklahoma at the age of 64 years. Mike was raised and educated in Dover and graduated with the Dover High School Class of 1976. After high school, he enlisted and served his country honorably in the United States Air Force. After returning home, Mike attended Columbus Technical College in Columbus, Ohio where he earned his A&P Mechanical license. He spent most of his working life as an A&P Mechanic with American Airlines in Tulsa for 36 years. Mike was married on June 7, 2008, in Owasso, Oklahoma to Pamela (Ruyle) Arthurs. He enjoyed a variety of past times such as coaching sports, playing the guitar, and playing golf, but most of all he loved spending time with his family and especially his grandchildren. Those he leaves behind who hold many cherished memories include: His Wife; Pamela Arthurs 3 Children; Katharine Arthurs David Arthurs and wife Kandice Michael Arthurs 3 Stepchildren; Jenny Doddridge and husband Matthew Lora Miller and husband Trevor Chris Powell and wife Breeann 9 Grandchildren; Morgan, Reagan, RJ, Emma, Brayden, Trevis, Gabe, Zach, and Lacy. 3 Siblings; Chris Arthurs and wife Jamie Kimberly Arthurs Patty Arthurs He was preceded in death by his parents, Bill and Maryann. A memorial service will be held 10:30 a.m. on Friday, September 24, 2021 at the Mowery Funeral Service Chapel in Owasso. In lieu of flowers, the family request memorial donations be made in Mike’s memory to Wounded Warrior Project, P.O. Box 758516, Topeka, Kansas 66675-8516.

The family of Michael Kevin Arthurs created this Life Tributes page to make it easy to share your memories.

Send flowers to the Arthurs family.