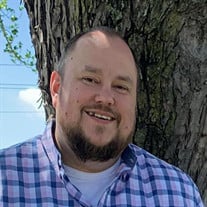 Michael Shane Stout was born July 7, 1982, in Tulsa, Oklahoma, to Tim Irvin and Rhonda Lynn Dodgin Stout. He died Friday, September 4, 2020, in Tulsa, Oklahoma, at the age of 38 years. Michael was reared and educated in Owasso, Oklahoma, and graduated with the Owasso High School Class of 2001. He was married October 11, 2003, in Owasso to Gina Patton. After working some time in the food service industry, he began working as a mechanic and manager with Sinclair Auto Center in Owasso. He was a faithful member of First Church in Owasso. Michael enjoyed a variety of pastimes including watching championship wrestling as well as being a NASCAR fan. Most prominent, however, was his love of Comic-Con comics and movies including Marvel and Star Wars characters. Those he leaves behind who hold many cherished memories include: His wife; Gina, and children, Jillian, Alayna, and Grayson, all of the home Brother; Cory Stout, of Owasso Parents; Tim and Rhonda Stout, of Owasso He was preceded in death by his grandparents, Jack and Paula Stout, and Paul and Francis Dodgin. Funeral service will be held 10:00 a.m. Wednesday, September 9, 2020, at First Church in Owasso with Pastor Matt Thomason officiating. Private family disposition will be held at a later date. Arrangements and services were entrusted to Mowery Funeral Service of Owasso. www.moweryfs.com

The family of Michael Shane Stout created this Life Tributes page to make it easy to share your memories.

Send flowers to the Stout family.