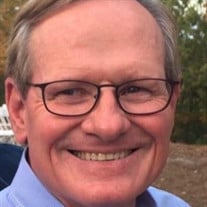 Michael (Mike) Ross Duncan was called home to his savior Jesus on Friday September 25, 2020. Mike was the loving husband of Sandy Duncan, the proudest of fathers to sons Jeff and Jason Duncan, stepfather to Cindy Morgan, Paula Butler and Rhonda Horton who he loved deeply as his daughters. Although Mike would want everyone to know his death at the young age of 70 is God’s perfect will and divinely appointed, that number 70 is a bit serendipitous. Mike’s first child Jeff was born in the year of ’70 and when Mike began his incredible legacy as a loving father to his above mentioned five children and is being carried on to twelve grandchildren and three great grandchildren. In ’70 Mike was a student at Oklahoma State University where he later graduated. Mike’s OSU education was followed by a very successful business career in the optical industry from which he retired in 2014. His business success was a result of his unique ability to build trust with others because anyone who met Mike knew he was genuinely interested in helping them out. Mike was an enthusiastic OSU alum regularly attending sporting events and it is where his sons would later graduate. If you painted Mike’s life, the main color palette would be orange and black. It was the colors of his sports car, much of his clothing, golf bag and accessories. Only secondary to his love for God and family, was Mike’s love for the game of golf. Until the time he was no longer able to play, a round of 70 was still well within his reach. More importantly, he loved the fellowship of the game evidenced by the annual tournament he created which drew hundreds of players from around the country who often speak of the precious lifelong memories Mike helped them create through his love of golf and greater love for his fellow golf buddies. Some of the most precious father son (grandson) moments with Mike were at the Truman Sports Complex on the side of I-“70” taking in Royals and Chiefs games. Including Game 6 of the 2014 World Series and most recently the Chiefs’ historic come from behind playoff win this January against the Texans. That same I-“70” was the path he would often take to Colorado for another passion of his, Rocky Mountain ski trips with family and friends. Whether it involved golfing, skiing, cruising or just relaxing and visiting family; Mike dearly enjoyed traveling with Sandy making lifelong memories together. Mike is survived by his wife Sandy, son Jeff, daughter in law, Shannon, and their children Adam and Luke, son Jason, daughter in law Heather, and their children Jack, Henry, and Brett, stepdaughter Paula, son in law John, and their children Shelby & Clayton, stepdaughter Rhonda, son in law Jerrod, and their children Zach and Taitem, stepdaughter Cindy, son in law Marty, their children Mary Lou, Dawn, Amanda and three great grandchildren Lillian, Conor and Owen. In lieu of flowers, donations can be made to the food bank Mike helped run at he and Sandy’s home church of First United Methodist Church Owasso located at 13800 E 106th St N, Owasso, OK 74055.

The family of Mike Duncan created this Life Tributes page to make it easy to share your memories.

Send flowers to the Duncan family.