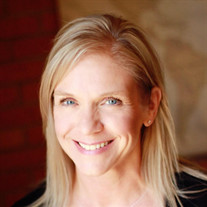 Mollie Michelle Heaberlin, a teacher and mother of two, died on April 23rd, 2020 after a heroic battle with cancer. She was 52. Memorial services pending through Mowery Funeral Services. Mollie was born on October 5th, 1967 in Parsons, Kansas, the daughter of Barbara and Jerry Abbott. Mollie grew up in Weatherford. She described her life as perfect until her sister Jennifer was born. The daughter of two musicians, Mollie began playing piano at an early age. Her mother was her first piano teacher. Mollie excelled at piano and later studied the flute. When she was a teenager, Mollie and her family moved to Broken Arrow. She attended First Methodist Church and was a member of the Broken Arrow High School Pride Marching Band. Mollie graduated from high school in 1985. She studied English at Oklahoma City University and later, held various administrative positions in education, insurance and medicine. In 1996, she married Tony Heaberlin, instantly creating a family of three with son Collin Heath. In 1999, she gave birth to her son Casey Heaberlin. Mollie began teaching at the Montessori Learning Academy where Casey was a student. She said she fell in love with teaching and wanted to dedicate herself to education. After five years, she took over operations at the school becoming Director-Teacher Leader at the school and helping to rename it Christian Montessori Academy. Mollie and her family lived in Tulsa for almost 15 years. In 2011, she and her family moved to a ten-acre farm just outside Owasso, naming it the Tin Star Ranch. Mollie said she loved the peace and quiet of the country. She enjoyed watching the many birds, deer and other wildlife that roamed the ranch. Mollie retired from Christian Montessori Academy at the end of 2019 due to health concerns. She had taught there for 18 years and, prior to her retirement, studied to become a certified personal trainer. Mollie worked part-time at Drive Fitness in Owasso helping clients maintain a healthy lifestyle and reach their fitness goals. Survivors include her husband, Tony, sons Casey Heaberlin and Collin Heath and his wife Becca. Other survivors include her parents Barbara and Jerry Abbott and sister Jennifer White, and her husband Paul along with in-laws Ken and Kathy Heaberlin, her ex-husband Walter Heath and many aunts, uncles and cousins and her dog, Max. In lieu of flowers, family and friends are encouraged to donate to the CMA-Mollie Heaberlin Legacy Scholarship at Regent Bank www.montessorilearning.org, the Bailey Education Foundation at Bailey Medical Center in Owasso www.baileyeducationfoundation.com or Porta Caeli House, a hospice facility in Tulsa www.portacaeli.org.

Mollie Michelle Heaberlin, a teacher and mother of two, died on April 23rd, 2020 after a heroic battle with cancer. She was 52. Memorial services pending through Mowery Funeral Services. Mollie was born on October 5th, 1967 in Parsons, Kansas,... View Obituary & Service Information

The family of Mollie Michelle Heaberlin created this Life Tributes page to make it easy to share your memories.

Mollie Michelle Heaberlin, a teacher and mother of two, died...

Send flowers to the Heaberlin family.