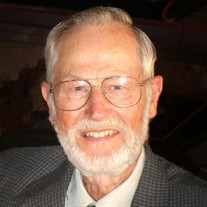 Nelson LaVerne Wolfe was born June 20, 1936 at his home in Grant County, Indiana to Maynard LaVerne Wolfe and Mary Magdalene (Brown) Wolfe. He passed from this life on Tuesday, November 13, 2018, in Collinsville, Oklahoma, at the age of 82 years. Nelson was raised and educated in Swayzee, Indiana and graduated with the Swayzee High School Class of 1954. After high school he earned his Bachelor of Arts in Pre-Med from Asbury College in Wilmore, Kentucky and his Doctorate from Indiana University School of Dentistry in Bloomington, Indiana. Nelson enlisted and served his country in the United States Public Health Service. He was married to Hazel Jean (Ham) Wolfe on July 26, 1958 at Middlewell Methodist Church in Middlewell, Texas. He spent most of his life as a dentist in private practice, and also taught at dental schools: Medical College of Virginia, Emory University, and Oral Roberts University. Nelson was a charter member of The Anglican Church of St. Paul and has attended since October 1, 2006. He had a variety of pastimes such as using his pilot license to fly his own plane, studying pathology, gardening, traveling, teaching, photography, amateur radio, bee keeping, and most recently raising his beloved chickens. Those he leaves behind who hold many cherished memories include: Wife; Jean Wolfe, of Collinsville Daughter; Barb Kontje and husband Daniel, of Broken Arrow 2 Sons; Greg Wolfe and wife Stacey, of Sunnyvale, California Byron Wolfe and wife Barb, of Villanova, Pennsylvania 7 Grandchildren; Matthew and Jennifer Kontje; Jordan, Sarah and Audrey Wolfe; and Ethan and Ben Wolfe. He was preceded in death by his parents, Maynard and Mary, and Sister, Virginia. Memorial Service will be held 10:00 a.m. Saturday, December 1, 2018 at the Mowery Funeral Service Chapel in Owasso with Pastor Chris Waters officiating. Visitation will be 5:00-8:00 PM, Friday, November 30 at Trinity House, 9210 N Garnett Road, Owasso. In lieu of flowers, the family request that donations be made in Nelson’s memory to either St. Paul’s Outreach Fund, P.O. Box 1858, Owasso, Oklahoma 74055, or the Nelson L. and H. Jean Wolfe Donor Advised Fund, checks payable to Communities Foundation of Oklahoma, P.O. Box 21210, Oklahoma City, Oklahoma 73156. Arrangements and services were entrusted to Mowery Funeral Service of Owasso.

Nelson LaVerne Wolfe was born June 20, 1936 at his home in Grant County, Indiana to Maynard LaVerne Wolfe and Mary Magdalene (Brown) Wolfe. He passed from this life on Tuesday, November 13, 2018, in Collinsville, Oklahoma, at the age of 82 years.... View Obituary & Service Information

The family of Nelson LaVerne Wolfe D.D.S. created this Life Tributes page to make it easy to share your memories.

Send flowers to the Wolfe family.