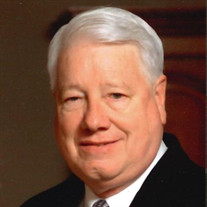 Dr. Norman Wayne Hinkle was born April 10, 1943, in Claremore, Oklahoma, to Buel and Flossie Mae Smith Hinkle. He passed Monday, March 15, 2021, in Tulsa, Oklahoma, at the age of 77 years. Norman was reared and educated in Claremore, Oklahoma, and graduated with the Claremore High School Class of 1961. He continued his education at Northeastern State University in Tahlequah, Oklahoma, where he earned his bachelor’s degree, then attended Southern College of Optometry in Memphis, Tennessee, earning his Doctor of Optometry degree. He began his practice in Owasso, Oklahoma, for over 55 years before his retirement in 2019. He was at the forefront of state and national association efforts to further the profession. He served on more than 10 committees of the American Optometric Association, including the AOA Political Action Committee Board, License and Regulation Committee, and Federal Regulations Task force, among others. He served the Oklahoma association as its President and Chairman of the Ethics and Peer Review as well as Meetings and Education chairman. He also served on the Board of Directors for the Southwest Council of Optometry, which serves a six-state region. Norman also took an active role locally in Owasso as a member of the Chamber of Commerce, having served as president in 1970. He along with former Owasso Superintendent of Schools Dale Johnson, helped organize the Owasso Christmas Parade. He and Dale supervised the planning and organization of the parade for many years. Norman was also active with the Owasso Lion’s Club and served as the groups President and Treasurer. He was a longtime faithful member of the First United Methodist Church in Owasso and always was available to work the Pumpkin Patch each year. Norman was married October 10, 1970, in Claremore, Oklahoma, to Marilyn Cook Hinkle. Together they have been involved in the AFS foreign exchange program, hosting several international students. He enjoyed a variety of pastimes including spending time at the family cabin on Grand Lake and traveling. Norman would tell you that optometry was his hobby, saying “You need to give back”. Those he leaves behind who hold many cherished memories include: His wife of over 50 years; Marilyn Two sons; Hunter Hinkle and wife Sarah, of Athens, Georgia Jon Hinkle, of Owasso Granddaughter; Pandora Hinkle AFS Sons; Marko Saloranta, Finland Harold Lacayo Gonzalez, Costa Rica Gabriel Zorzi, Brazil He was preceded in death by his parents, Buel and Flossie Hinkle A visitation will be held to greet the family from 2:00 p.m. to 4:00 p.m. Sunday, March 21, 2021, at the Mowery Funeral Service Chapel in Owasso (no viewing). Funeral service will be held 10:30 a.m. Tuesday, March 23, 2021, at the First United Methodist Church in Owasso with Dr. Jim Cinocca officiating. Final resting place will be at Woodlawn Cemetery in Claremore, Oklahoma. In lieu of flowers or gifts, the Hinkle family would be honored to have a donation made in the name of Norman Hinkle to the Oklahoma School of Optometry, https://securelb.imodules.com/s/1517/bp20/interior.aspx?sid=1517&gid=1&pgid=541&cid=1222 , or https://www.nsualumni.com/s/1517/bp20/interior.aspx?sid=1517&gid=1&pgid=1877 . Arrangements and services were entrusted to Mowery Funeral Service of Owasso. www.moweryfs.com

The family of Norman Wayne Hinkle created this Life Tributes page to make it easy to share your memories.

Send flowers to the Hinkle family.