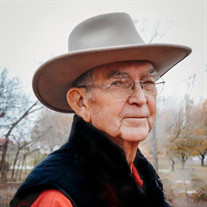 Olen Travis Shults was born January 16, 1940, in Sundown, Texas, to James Ike and Vera Carter Shults. He died Saturday, February 29, 2020, in Tulsa, Oklahoma, at the age of 80 years. Olen was reared and educated in Sundown, Texas, and graduated with the Sundown High School Class of 1959. He continued his education attending Texas Tech University in Lubbock, Texas. Olen was married June 21, 1959, in Sundown to the love of his life and childhood sweetheart, Pat Nugent. He spent much of his working life as a sales representative with Westendorf Manufacturing in Collinsville, Oklahoma. He had been a faithful member of First Baptist Church of Collinsville since 1971 and served as an ordained Deacon. He enjoyed a variety of pastimes including fishing and traveling to Colorado. He and his sons built a cabin in Colorado from the ground up which he was very proud of. He operated a lawn and garden business and contracted as an installer for Sears. He was Member of the Masonic Lodge and spent time as an auctioneer. Those he leaves behind who hold many cherished memories include: His wife; Pat, of the home Four sons; Gary Shults and wife Kathy, of Fort Worth, Texas Ronnie Shults and wife Kelly, of Collinsville James Shults and wife Crystal, of Collinsville Randy Shults and wife Ede, of Collinsville Eight grandchildren; Leslie Shults-Burton, Bradley Shults, Kyle Shults, Crystal Shults-Horner, Justin Shults, Cody Shults, Madalyn Shults and Blake Shults 13 great grandchildren Two sisters; Kathleen Black, of Sevierville, Tennessee Rhonda Lee and husband Ken, of Muskogee, Oklahoma He was preceded in death by his parents, and one sister, Beverly Gipson. Visitation will be held from 4:00 p.m. to 8:00 p.m. Tuesday, March 3, 2020, at Mowery Funeral Service in Owasso. Funeral service will be held 3:00 p.m. Wednesday, March 4, 2020, at First Baptist Church of Collinsville with Pastor Tim Prock officiating. Final resting place will be at Sundown Cemetery in Sundown, Texas. The family requests memorial contributions be made to the First Baptist Church of Collinsville Children’s Ministry, 1301 West Main Street, Collinsville, Oklahoma, 74021. Arrangements and services were entrusted to Mowery Funeral Service of Owasso. www.moweryfs.com

Olen Travis Shults was born January 16, 1940, in Sundown, Texas, to James Ike and Vera Carter Shults. He died Saturday, February 29, 2020, in Tulsa, Oklahoma, at the age of 80 years. Olen was reared and educated in Sundown, Texas, and graduated... View Obituary & Service Information

The family of Olen Travis Shults created this Life Tributes page to make it easy to share your memories.

Send flowers to the Shults family.