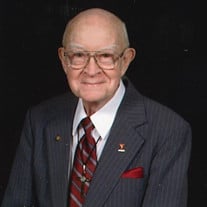 The Reverend Oscar B. Davis, Jr. was born June 29, 1926, at Palmyra, Missouri to Oscar B. and Birdie Smith Davis. He died at the age of 94 years. On April 12, 1946, in Enid, Oklahoma he married Marjory Ann Guthrie whom he had met at Phillips University where both were students and members of the university band. They were married at the home of her parents in Enid. As a student he was a member of the Varsity Club. In 1947 he received the Bachelor of Arts degree from the College of the Bible. In 1949 he received the Bachelor of Divinity (now Master of Divinity) degree from the School of Religion (now Christian Theological Seminary) at Butler University in Indianapolis, Indiana. His student pastorate was at Star City, Indiana. Following graduation, he served Christian Church Disciples of Christ congregations in Missouri, Arkansas, and Oklahoma. In 1968 he chose to pursue post-graduate studies at the Graduate Seminary of Phillips University where he received the degree of Master of Theology in 1970 and the Doctor of Ministry degree (magna cum laude) in 1971. At that time, he was accepted into Theta Phi, an honorary scholastic fraternity. He was called to serve the Christian Church at Iowa Falls, Iowa. He retired in Enid, Oklahoma. He was ordained in 1946 by the congregation of his home church at Dexter, Missouri and remained a faithful servant of Jesus. Following retirement, he continued to serve as pulpit supply for several churches in Northwest Oklahoma. He was preceded in death by his parents, his son David Lee Davis, His wife and five half-brothers. Surviving are: Two daughters: Margaret A. Michael Betty L. Firth Half Sister: Elizabeth Davis Bowman Seven grandchildren Fifteen great grandchildren. Visitation will be held from 4:00 p.m. to 8:00 p.m. Monday, June 28, 2021, at Mowery Funeral Service in Owasso. Funeral service will be held at 10:00 a.m. Friday, July 2, 2021, at the City Cemetery of Dexter, Missouri. The family requests memorial contributions be made to The Collinsville Community Church, in Collinsville, Oklahoma. Arrangements and services were entrusted to Mowery Funeral Service of Owasso. www.moweryfs.com

The Reverend Oscar B. Davis, Jr. was born June 29, 1926, at Palmyra, Missouri to Oscar B. and Birdie Smith Davis. He died at the age of 94 years. On April 12, 1946, in Enid, Oklahoma he married Marjory Ann Guthrie whom he had met at Phillips... View Obituary & Service Information

The family of Oscar Benjamin Davis Jr. created this Life Tributes page to make it easy to share your memories.

Send flowers to the Davis family.