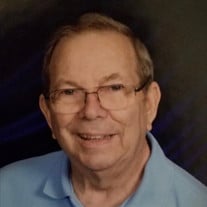 Owen Wayne Purcell was born January 14, 1943, in Tulsa, Oklahoma, to Paul Robert and Della Elizabeth Upjohn Purcell. He died Monday, September 2, 2019, in Collinsville, Oklahoma, at the age of 76 years. Owen was reared and educated in Tulsa and completed his secondary education at Webster High School graduating in 1961. As a teenager he worked at Warehouse Market in Tulsa. Most of his working life was spent as a firefighter with the Tulsa Fire Department. He was married July 2, 1982, in Owasso, Oklahoma, to Katy Rutherford. They had lived in Talala, Oklahoma, before moving to Collinsville, Oklahoma, in 2015. Owen enjoyed a variety of pastimes including being outdoors hunting and camping. He also enjoyed a good game of dominoes and playing bean bag toss. He was an avid fan of the Oklahoma Sooners. He was very fond of his role as Grandpa. Those he leaves behind who hold many cherished memories include: His wife; Katy, of the home Children; Curtis Pettey and wife Bobbie, of Collinsville, Oklahoma Bryan Purcell and wife Cindy, of Collinsville, Oklahoma Teri Tatum and husband Brian, of Chelsea, Oklahoma Darryl Purcell, of Bristow, Oklahoma Debbie Roberts and husband Elmer, of Claremore, Oklahoma Tammy Kahn and husband Mo, of Tulsa, Oklahoma 30 Grandchildren 27 Great grandchildren One sister; Linda Fisher and husband Bob, of Sapulpa, Oklahoma And a host of other relatives and friends. He was preceded in death by his parents, three brothers, Leroy Purcell, Lloyd Purcell, and Harold Purcell, and one sister, Kay Brock. Visitation will be held from 4:00 p.m. to 8:00 p.m. Wednesday, September 4, 2019, at Mowery Funeral Service in Owasso. Funeral service will be held 10:00 a.m. Thursday, September 5, 2019, at the Mowery Funeral Service Chapel in Owasso with Pastor Chuck Brown and Pastor Joe Goodin officiating. Serving as casket bearers will be Aaron Purcell, Bradley Purcell, Justin Purcell, Joshua Purcell, Dillon Roberts, Austin Roberts. Firefighter honors and flag presentation will be provided by the Tulsa Fire Department Honor Guard. Committal service and interment will follow at Memorial Park Cemetery in Tulsa. Arrangements and services were entrusted to Mowery Funeral Service of Owasso. www.moweryfs.com

Owen Wayne Purcell was born January 14, 1943, in Tulsa, Oklahoma, to Paul Robert and Della Elizabeth Upjohn Purcell. He died Monday, September 2, 2019, in Collinsville, Oklahoma, at the age of 76 years. Owen was reared and educated in Tulsa... View Obituary & Service Information

The family of Owen Wayne Purcell created this Life Tributes page to make it easy to share your memories.

Send flowers to the Purcell family.