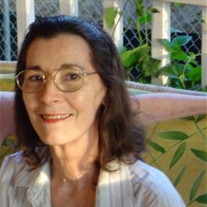 Patricia Farrell passed away August 22, 2018 at age 81 in Sperry Oklahoma. She went to be with her Lord peacefully, as she had lived her life. Born in Battle Creek, Michigan February 25, 1937 to Jack Richard Stiner and Helen Anita Laine, like them, she attended Battle Creek High School (class of 1955). She went on to Kellogg Community College and later to Austin Peay State University in Clarksville, Tennessee. Pat strongly believed in the equality of women, and she led the way by working on her own education and career as an executive secretary at Emmett Street Missionary Church, while raising her three children. She often spoke of her role model, grandmother Emily Stolz Laine, who immigrated to Battle Creek from Germany in 1903. Emily spoke 5 languages and enjoyed two successful careers while raising her own large family. Pat was a master gardener and she took joy in tending the fruits and flowers of the earth throughout her life. She showed her African violets and begonias in competitions. She was also an avid reader, diligent correspondent, accomplished choir soloist, and a talented seamstress. Pat and her husband James were married in 1955 at Lakeview Baptist Church in Battle Creek. After moving to Clarksville and then Memphis, Tennessee, they lived In Peoria, Illinois and Fairfield, Connecticut, following job opportunities during the 1970s and ‘80s. They moved to the Tulsa, Oklahoma area during retirement in 1999 to be near Thomas Farrell, his wife Loretta, and their three grandchildren in nearby Owasso. Pat’s spiritual life and faith in God were everlasting, and she counseled and prayed with others in need. She spent her final decade building “Christian Healing,” a ministry in Sperry, Oklahoma, with Ellen Hurley, which she felt was the pinnacle of her life’s achievements. She attended church at both Owasso First Assembly of God and First United Methodist Church of Tulsa. She was preceded in death by her uncle George Laine, killed in WWII, father Jack Stiner, mother Helen Laine (2006), aunts Louise Fick (2007) and Elizabeth Laine Wolter (1998), and sister Jeanne Pierce (2015). She will be dearly missed by her husband James Allen Farrell, son Thomas, daughters Susan Farrell and Sarah Farrell, grandchildren Michael, Joshua and Anastasia, niece and nephew Julie Anne Suarez and Danny Weiss, and her cousins Karen (Walter) Urick, Ewald Fick and Eddie Laine. A celebration of Patricia’s life will be held in Oklahoma at Owasso First Assembly of God, Thursday, August 30, 2018. All are welcome. Visitation begins at 10:00 a.m., funeral service at 11:00 a.m. In lieu of flowers, donations can be made in memory of Patricia Farrell to the medical mission clinic in La Ceiba Dudu, Nicaragua, via Assemblies of God: https://www.hope.clinic/

Patricia Farrell passed away August 22, 2018 at age 81 in Sperry Oklahoma. She went to be with her Lord peacefully, as she had lived her life. Born in Battle Creek, Michigan February 25, 1937 to Jack Richard Stiner and Helen Anita Laine, like... View Obituary & Service Information

The family of Patricia Annette "Pat" Farrell created this Life Tributes page to make it easy to share your memories.

Send flowers to the Farrell family.