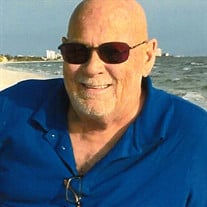 Patrick Lloyd Fuller was born January 3, 1949, in Chicago, Illinois, to Lloyd “Bud” and Astrid Irene Soderland Fuller. He died Tuesday, November 20, 2018, in Tulsa, Oklahoma, at the age of 69 years. Patrick was reared and educated in Illinois and was a graduate of Glenbard East High School in Lombard. He continued his education at the College of DuPage in Glen Ellyn, Illinois. Patrick served his country honorably with the United States Air Force in pararescue including three tours during the Vietnam War. Patrick later attended Northwestern Connecticut Community College in Winsted, Connecticut. He was married March 3, 1973, in Lombard, Illinois, to Catherine McGuire. He spent much of his working life as an aerospace engineer and consultant with several companies. He was a faithful member of Grace Lutheran Church in New Albany, Indiana. Patrick enjoyed a variety of pastimes including sailing, especially in places like Crystal Lake in Minnesota, San Francisco Bay in California, and Oologah Lake in Oklahoma. Patrick enjoyed taking cars like Corvettes, BMWs, and Porsches apart and putting them back together. Patrick also loved to read, particularly, military and political fiction. For the last year of his life, Patrick resided in the Veteran’s Center in Claremore. Those he leaves behind who hold many cherished memories include: His loving wife of over 45 years, Catherine; Four children: Stacy Fuller, of Owasso; Kelly Fuller and her fiancé, Tyler Nelson, of Owasso; Bryan Fuller and wife, Kristy, of Sellersburg, Indiana and Jason Fuller, of Louisville, Kentucky; Six grandchildren: Alexandra Fuller, Ethan Fuller, Jaxon Fuller, Elijah Fuller, Orin Nelson, and Kaylin Fuller; and sister, Diane Reilly, and husband, Scott. He was preceded in death by his parents, and a sister, Denise Cummings. Funeral service will be held 2:00 p.m. Monday, November 26, 2018, at the Mowery Funeral Service Chapel in Owasso with Pastor Leonard Pirtle officiating. A private family disposition will be held at a later date. Arrangements and services were entrusted to Mowery Funeral Service of Owasso. www.moweryfs.com

The family of Patrick Lloyd Fuller created this Life Tributes page to make it easy to share your memories.

Send flowers to the Fuller family.