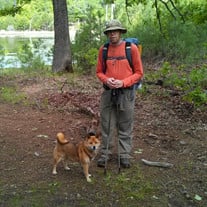 Paul Eban Carter was born July 3, 1966, in Waynoka, Oklahoma, to Dr. Merle Dean and Patricia Ann Clark Carter. He died Monday, April 22, 2019, in Oklahoma, City, Oklahoma, at the age of 52 years. Paul was reared and educated in Piedmont, Oklahoma, and graduated with the Piedmont High School Class of 1984. He continued his education at Oklahoma State University Institute of Technology earning he associated degree. He also attended Canadian Valley Technical Center in El Reno, Oklahoma. Paul spent most of his working life as a computer aided draftsman, primarily with FADCO in Tulsa. He enjoyed a variety of pastimes, especially if it meant being outdoors. He loved to go biking, four wheeling, hiking, and fishing, particularly at his favorite places in Colorado. He also enjoyed woodworking. Those he leaves behind who hold many cherished memories include: His mother; Patricia Carter, of Owasso Brother; Scot D. Carter, of Bentonville, Arkansas Sister; Ann E. Norwood and her husband Dr. Kevin W. Norwood, of Owasso Niece and nephew; Maci Norwood and London Norwood, of Owasso He was preceded in death by his father, Merle D. Carter and his beloved dog, Molly Funeral service will be held 1:00 Friday, April 26, 2019, at the Mowery Funeral Service Chapel in Owasso with Dr. Kevin Norwood officiating. Final resting place will be at Graceland Memorial Park Cemetery in Owasso. Arrangements and services were entrusted to Mowery Funeral Service. In lieu of flowers, donations can be made to the Small Animal Hospital of Owasso (SAHO). www.moweryfs.com

The family of Paul Eban Carter created this Life Tributes page to make it easy to share your memories.

Send flowers to the Carter family.