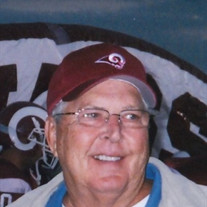 Perry David Cleveland was born July 15, 1940, in Durant, Oklahoma, to David Columbus and Mary Lorene Moore Cleveland. He passed away on Tuesday, September 7, 2021, in Owasso, Oklahoma, at the age of 81 years. Perry completed his secondary education at Harding High School in Oklahoma City, Oklahoma. He was a veteran of the armed forces having served his country honorably with the United States Air Force. He was married September 16, 1962, in Porter, Oklahoma, to Carole Jean Johnson. He continued his education attending Spartan School of Aeronautics in Tulsa, Oklahoma. Perry was a highly respected businessman in Owasso and, in his own words, “Sold everything but used cars.” He owned and operated Cleveland and Associates Real Estate Brokerage in Owasso for many years. Perry owned and operated Perry’s Restaurant and Crossroads Restaurant in Owasso as a well as a Tastee Freeze Restaurant in Tulsa. He enjoyed a variety of pastimes including golfing, time on the lake boating, and collecting knives. Those he leaves behind who hold many cherished and humorous memories include: His wife of nearly 59 years; Carole of the home, Children; Steve Cleveland and wife Vanessa, Lori Snedden and husband Chris, Grandchildren; Cynthia Cunningham, Samantha Billings, Jessica Cleveland, Jacob Snedden, Emily Snedden, and MacKenzy Cleveland, Great grandchildren; Peyton Cunningham, Paisley Billings, Lillian Snedden, Brooklyn Billings, and Maxwell Snedden, Brothers; Dale Cleveland and wife Lynn, Neil Cleveland and wife Barbara, as well as a host of nieces and nephews and other family and friends. He was preceded in death by his parents, and his oldest son, Jeffrey David Cleveland and wife Kelly. Private family services will be planned at a later date. The family asks that in lieu of flowers, donations be made to the Owasso Community Resource Center, https://www.owassohelps.org/. Arrangements and services were entrusted to Mowery Funeral Service of Owasso, www.moweryfs.com.

Perry David Cleveland was born July 15, 1940, in Durant, Oklahoma, to David Columbus and Mary Lorene Moore Cleveland. He passed away on Tuesday, September 7, 2021, in Owasso, Oklahoma, at the age of 81 years. Perry completed his secondary... View Obituary & Service Information

The family of Perry David Cleveland created this Life Tributes page to make it easy to share your memories.

Send flowers to the Cleveland family.