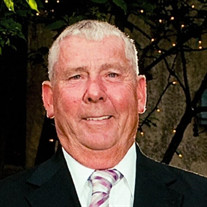 Perry Dal Jones was born December 30. 1944, in Welch, Oklahoma, to John Edward Jones and Daisey Bell Paup Jones. He died Saturday, February 5, 2022, in Tulsa, Oklahoma, at the age of 77 years. Perry was reared and educated in Welch, Oklahoma, and graduated with the Welch High School Class of 1963. He was a veteran of the armed forces having served his country honorably with the United States Army. He was married June 22, 1968, in Vinita, Oklahoma, to Sherry Jean Trimble. They had made their home in Owasso, Oklahoma, since 1971. Perry spent most of his life in the automotive industry having been owner of Owasso Auto Care. Perry was a strong man of faith and was a member of Friendship Baptist Church in Owasso. He enjoyed gospel music and traveling the surrounding states to hear gospel music quartets. Perry was best known for being a hard worker, all the time, and he only knew one gear which was full speed. Those he leaves behind who hold many cherished memories include: His wife; Sherry, of the home Children; Steve Jones, of Owasso, Oklahoma Shelly Smith and husband Rob, of Owasso, Oklahoma Grandchildren; Declan Smith and Dawson Smith Sister; Peggy Frazier, of Muskogee, Oklahoma He was preceded in death by his parents, brother, Dutch Jones, and sister, Billye Marie Flanders. Visitation will be held from 4:00 p.m. to 8:00 p.m. Thursday, February 10, 2022, at Mowery Funeral Service of Owasso. Funeral service will be held 11:00 a.m. Friday, February 11, 2022, at Friendship Baptist Church in Owasso with Pastor Linzy Slayden officiating. Serving as casket bearers will be Gary Bullard, Gary Curlee, Michael Clickner, Scott McWilliams, John Kohen, and Mark Rose. Committal service and interment will follow at Graceland Memorial Park Cemetery in Owasso. The family requests memorial contributions be made in Perry’s memory to the Friendship Baptist Church Mission Fund, 14100 East 86th Street North, Owasso, Oklahoma, 74055. Arrangements and services were entrusted to Mowery Funeral Service of Owasso. www.moweryfs.com

The family of Perry Dal Jones created this Life Tributes page to make it easy to share your memories.