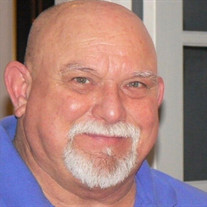 Phillip Nickolas Jackson, Sr. was born at home on February 9, 1944, in Tulsa, Oklahoma, to Marshall Edward and Inez Thornhill Jackson. He died peacefully surrounded by his family on Monday, January 13, 2020, in Tulsa, Oklahoma, at the age of 75 years. Phillip completed his secondary education in Tulsa and graduated with the Central High School Class of 1962. A veteran of the armed forces, he served his country honorably as an electronic technician aboard two destroyers in the United States Navy; the USS Shelton (DD-790) and USS Hopewell (DD-681) where he completed two tours in the Vietnam War earning the National Defense Service Medal, Vietnam Service Medal with two Bronze Stars, and Republic of Vietnam Campaign with Device. Proclaiming his love to her when she was only 14 years old, Phillip was married on June 6, 1964, in Tulsa, Oklahoma to Shirley Bellamy. They were faithful members of their childhood church, Garnett Assembly of God then later Eastland Assembly of God, both where he served as a deacon. A respected tool and die maker by profession, he owned his own companies, LaVonne Industries and most recently, Nickolas Manufacturing and was issued a patent by the US Patent Office for a 5th-wheel king pin stabilizer he invented which revolutionized the industry. Interests were varied and diverse including licensed pilot, certified scuba diver, boxing, Indy/NASCAR, and supporting all local sports teams with a preference for the Oklahoma Sooners. He and Shirley enjoyed traveling to Branson, MO in their RV with the grandkids and trying all the roller coasters. Riding motorcycles, trips to the gun range, his gun collection, participating in the ride-a-long program with the Tulsa Police Department and serving as president of the Western Village Homeowners Association provided him great joy. Cherished loved ones he leaves behind with hearts full of memories include: His wife of over 55 years; Shirley, of the home Children; Tammy Mullins, of Owasso, Oklahoma Phillip Jackson, Jr., and wife Jennifer, of Republic, Missouri Kerry Jackson and wife Michele, of Collinsville, Oklahoma Grandchildren; Brittany Bagwill and husband Jacob, of Mannford, Oklahoma Cameron Shatwell and Jackson Mullins, of Owasso Haleigh McDaniel and husband Jeremy, of Inola, Oklahoma Toniee Jackson, of Yukon, Oklahoma Preston Shatwell, of Tulsa Phillip “Nickolas” Jackson, III and Adah Jackson, of Republic, Missouri Kyle Jackson and Taylor Jackson, of Collinsville, Oklahoma Joshua Law, of Broken Arrow, Oklahoma Great grandchildren; Ryder, Sawyer, Adalynn, Gentry, and Bellamy Sister; Katherine Magrini, of Tulsa He was preceded in death by his parents, two sisters, Christine Perryman and Naomi Chastean, and two brothers, Calvin Jackson and Marshall Jackson. Visitation will be held from 4:00 p.m. to 8:00 p.m. Monday, January 20, 2020, at Mowery Funeral Service in Owasso. Funeral service and celebration of life will be held 10:00 a.m. Tuesday, January 21, 2020, at Eastland Assembly of God in Tulsa with Pastor Randy Dyer officiating. Committal service and interment will be held at Fort Gibson National Cemetery in Fort Gibson, Oklahoma. Arrangements and services were entrusted to Mowery Funeral Service of Owasso. www.moweryfs.com

Phillip Nickolas Jackson, Sr. was born at home on February 9, 1944, in Tulsa, Oklahoma, to Marshall Edward and Inez Thornhill Jackson. He died peacefully surrounded by his family on Monday, January 13, 2020, in Tulsa, Oklahoma, at the age of... View Obituary & Service Information

The family of Phillip Nickolas Jackson created this Life Tributes page to make it easy to share your memories.

Phillip Nickolas Jackson, Sr. was born at home on February 9,...

Send flowers to the Jackson family.