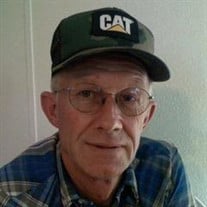 Randall Edgar “Randy” Wells was born May 17, 1950, in Maryville, Missouri, to Willis Edgar and Rosemary McCampbell Wells. He died Wednesday, March 13, 2019, in Sperry, Oklahoma, at the age of 68 years. Randy was reared and educated in Union Star, Missouri, and graduated with the Union Star High School Class of 1968. He was a veteran of the armed forces having served his country honorably with the United States Army. He was married November 16, 1985, in Lubbock, Texas, to Wanda Clemens. Randy spent most of his working life with Warren CAT, in which he spent the last 16 years in Tulsa, retiring after 44 years as a diesel mechanic. He enjoyed a variety of pastimes, especially if it meant being outdoors whether hunting, fishing, or mowing and manicuring his yard. He and Wanda also enjoyed spending time at their cabin at the Lake of the Ozarks. Always willing to lend a hand, even when Randy wasn’t working, he still enjoyed working on other friends’ vehicles and tractors. When it came to relax, he was an avid fan of watching the old Western movies. Those he leaves behind who hold many cherished memories include: His wife of over 33 years; Wanda, of the home Children; Joe Wells and wife Sherri, of Wolfforth, Texas Jennifer Williamson and husband Chris, of Wolfforth, Texas Jimmy Wells, of Sperry, Oklahoma Grandchildren; Dustin Wells and wife Kaileigh, of Lubbock, Texas Travis Edwards, of Wolfforth, Texas Robby Ragland, of Denver, Colorado Steven Fowler, of Wolfforth, Texas Brianna Williamson, of Wolfforth, Texas Kamen Williamson and fiancé Brendyn Johnson, of Amarillo, Texas One great grandson; Trace Johnson Brother and sister-in-law; Roger and Melody Wells, of Savannah, Missouri Aunt; Marilyn June Shamberger, of Graham, Missouri And a host of nieces, nephews, and other relatives and friends. He was preceded in death by his parents. Funeral service will be held 2:00 p.m. Friday, March 22, 2019, at the Mowery Funeral Service Chapel in Owasso with Pastor Leonard Pirtle officiating. Private family disposition will be held at a later date. The family requests memorial contributions be made to the All Star Therapy Group, 37500 Highway 75, Ramona, Oklahoma, 74061, or the American Cancer Society, 4110 South 100th East Avenue, Suite 101, Tulsa, Oklahoma, 74146. Arrangements and services were entrusted to Mowery Funeral Service of Owasso.

The family of Randall Edgar Wells created this Life Tributes page to make it easy to share your memories.

Send flowers to the Wells family.