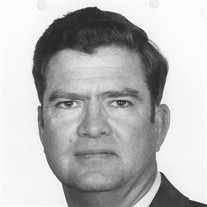 Ray Carlson was born September 12, 1930, in Hyrum, Utah, to Fred and Lanetha Carlson. He died Wednesday, July 17, 2019, in Owasso, Oklahoma, at the age of 88 years. Following his graduation from Cache County (Utah) High School, he attended Utah State University graduating in 1952 with a bachelor’s degree in education and a commission as a Second Lieutenant in the United States Air Force. Ray received his Pilots Wings at Laredo, Texas, in February of 1954. The majority of his Air Force career was spent in the Tactical Air Command (TAC). His Air Force career took him to Texas, Arizona, South Carolina, Japan, England, Korea, Vietnam, Nevada and finally home to Mountain Home AFB Idaho. Ray completed the RF101 Combat Crew Course in 1965 and was assigned to Thailand (RTAFB) from December 1965 to July 1966. He completed 100 missions over North Vietnam flying the mighty VOODOO or the RF101 which he always described as going into the hornet’s nest after hitting it with a baseball bat. Ray returned to Nellis AFB where he spent the next six years with the Operational Testing and Evaluation Program on the F-111. It was here in Las Vegas, Nevada, that he married his beloved wife, Helen, December 13, 1968. In August of 1973, he returned to Southeast Asia in the F-111. The wartime activities were winding down and Ray was assigned to Mountain Home AFB, Idaho. He retired in 1977 at which time Ray and his family moved to Grand Junction, Colorado. He subsequently worked for Dixon Electronics for the next 16 years at their National Sales Manager. When he “finally” retired he did what he loved most which was being in the outdoors skiing, fishing, hunting, and camping. He and Helen eventually found their love of cruising and took 24 cruises together seeing the wide wonderful world. Ray was awarded the Silver Star, The Distinguished Flying Cross with One Oak Leaf Cluster and The Air Medal with Nine Oak Leaf Clusters. He was very active with the Air Force Association and the Military Officers Association. He is survived by his wife of over 50 years, Helen, of Owasso, Oklahoma; his children, Steve Carlson and wife Marlene, of Salt Lake City, Utah; Michael Carlson and wife Tammy, of Idaho Falls, Idaho Falls, Idaho; Becky Carlson Peterson and husband Roy, of Burlington, Kentucky; Stacey Carlson Albertson and husband David, of Collinsville, Oklahoma; Brad W. Carlson, of Tulsa, Oklahoma; 14 grandchildren, many great grandchildren, and many wonderful nieces and nephews. Ray’s final resting place will be held at a later date at Arlington National Cemetery. Arrangements and services were entrusted to Mowery Funeral Service of Owasso, Oklahoma. www.moweryfs.com

Ray Carlson was born September 12, 1930, in Hyrum, Utah, to Fred and Lanetha Carlson. He died Wednesday, July 17, 2019, in Owasso, Oklahoma, at the age of 88 years. Following his graduation from Cache County (Utah) High School, he attended... View Obituary & Service Information

The family of Ray William Carlson created this Life Tributes page to make it easy to share your memories.

Send flowers to the Carlson family.