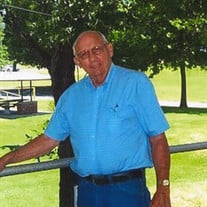 Ray A. Webb was born August 9, 1931, in Boone County, Arkansas, to Lonnie and Valley Mae Marrison Webb. He died Saturday, August 1, 2020, in Broken Arrow, Oklahoma, at the age of 88 years. Ray completed his secondary education in Bixby, Oklahoma, and graduated with the Bixby High School Class of 1950. He was a veteran of the armed forces having served his country honorably with the United States Air Force during the Korean War and was stationed in Japan. Ray was married March 10, 1956, in Bixby to Velma Fogleman. They had made their home in Owasso, Oklahoma, since 1965. Ray spent most of his working life as a mechanic with American Airlines before his retirement in 1991. He was a strong Christian man who dearly loved his church and his church family. He had served as a deacon and also taught Sunday School for many years. To say he enjoyed fellowship with fellow believers and friends is an understatement. He enjoyed fishing and playing golf. He especially enjoyed being outdoors and always staying busy. He always kept his yard in pristine condition, making sure his landscape was well maintained. He also grew a big vegetable garden and always had some to share with friends. When he was able, Ray loved to travel with Velma. They traveled all across the United States as well as abroad, including to Israel, Jerusalem, across Europe, Alaska, and the Panama Canal, just to name a few. Those he leaves behind who hold many cherished memories include: His wife; Velma, of the home Daughter; Debbie Williams and husband Don, of Claremore, Oklahoma Son, Mike Webb and wife Eva, of Owasso, Oklahoma Grandchildren; Julie Klinetobe and husband Dustin, of Owasso Jeff Williams and wife Jennifer, of Owasso Landon Webb, of Owasso Natalie Webb, of Claremore Great grandchildren; Kaylee Klinetobe, Korbin Klinetobe, Kamden Klinetobe, Elaina Williams, Katie Williams, Maverick Williams, and Travis Williams He was preceded in death by his parents, brother, Doy Webb, and sister, Geneva Fine A public visitation will be held from 4:00 p.m. to 8:00 p.m. Tuesday August 4, 2020, at Mowery Funeral Service in Owasso. A private family funeral will be held with burial at Floral Haven Memorial Gardens in Broken Arrow, Oklahoma. The family requests memorial contributions be made to Owasso Community Resources, 109 North Birch Street, #109, Owasso, Oklahoma, 74055. Arrangements and services were entrusted to Mowery Funeral Service of Owasso. www.moweryfs.com

The family of Ray A. Webb created this Life Tributes page to make it easy to share your memories.

Send flowers to the Webb family.