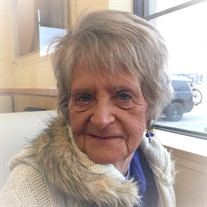 Renee Gray Brest was born April 23, 1944, in Dayton, Ohio, to Eldon Samuel and Marie Steinbarger Gray. She died Sunday, April 1, 2018, in Tulsa, Oklahoma, at the age of 73 years. Renee was reared and educated in Dayton, Ohio, and was a graduate of Fairmont High School. She had made her home in Owasso, Oklahoma, since 1978. She worked various jobs throughout her lifetime, but primarily was a homemaker and cared for her family. Renee attended St. Henry’s Catholic Church in Owasso and was active at the Owasso Senior Center. She enjoyed and was very proficient in interior design as well as floral design. Those she leaves behind who hold many cherished memories include: Her husband; Norman Colvin, of Owasso Daughter and son-in-law; Michele and Kenny Lovelace, of Collinsville, Oklahoma Son and daughter-in-law; John Brestovansky and his wife, of Tulsa, Oklahoma Grandchildren; Tony Daniels and wife Sarah, of Tulsa Erin Stephens and husband Josh, of Collinsville Misty Miller and husband Nate, of Sperry, Oklahoma Suzanna Holt, of Broken Arrow, Oklahoma Carter Brestovansky and Braxton Brestovansky, of Tulsa Great grandchildren; Madalynn Daniels, Benjamin Daniels, and Beau Daniels Brody Stephens and Shepard Stephens Dylan Miller, Ellie Miller, and Mariah Hodge Three sisters and brothers-in-law; Cynthia and Harold Pyles Judith and Tom Kramer Melody and Melvin Van Diver, all of Kettering, Ohio Sister-in-law; Maxine Bower, and her daughter, Dannie Bower She was preceded in death by her parents, and her first husband, John Michael “Jack” Brest. A visitation and time to greet family will be held from 9:00 a.m. to 12:00 noon Thursday, April 5, 2018, at Mowery Funeral Service in Owasso. Interment will be held later at Memorial Park Cemetery in Tulsa. Arrangements and services were entrusted to Mowery Funeral Service of Owasso. www.moweryfs.com

Renee Gray Brest was born April 23, 1944, in Dayton, Ohio, to Eldon Samuel and Marie Steinbarger Gray. She died Sunday, April 1, 2018, in Tulsa, Oklahoma, at the age of 73 years. Renee was reared and educated in Dayton, Ohio, and was a graduate... View Obituary & Service Information

The family of Renee Gray Brest created this Life Tributes page to make it easy to share your memories.

Send flowers to the Brest family.