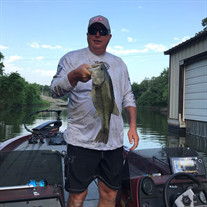 Richard “Rick” Lee Hogsett was born June 12, 1968, in Oklahoma City, Oklahoma and raised by his parents, Robert Henry Hogsett and Cleora June (Plummer) Hogsett. He passed from this life on Thursday, August 1, 2019 in Tulsa Oklahoma at the age of 51 years. Rick was raised and educated in Drummond, Oklahoma and graduated with the Drummond High School Class of 1986. After high school he enlisted and served his country honorably in the United States Army. Rick then went on to earn his certificate as a Paramedic at Oklahoma State University in Stillwater, Oklahoma. He spent most of his working life in the medical field as an EMT for six years and then as a Paramedic for the past 20 years. He was most recently working Mercy Regional EMS. Rick was married on November 29, 2018 in the Grand Cayman Islands to Brianne Michelle (Duffy) Hogsett. He was an active member in FFA when he was younger and enjoyed showing pigs. He was also an avid fisherman and loved OSU, but most of all he loved his job and had a passion for helping others and continues to do so as an organ donor. Those he leaves behind who hold many cherished memories include: Wife; Brianne Hogsett, of Collinsville 4 Sons; Tyler Hogsett and wife Amanda, of Perkins, Oklahoma Austin Hogsett and fiancé Rebecca, of Edmond, Oklahoma Brent Pirtle, of Collinsville Trey Smedley, of Collinsville 2 Sisters; Robin Sweeney and husband Kevin, of Plainview, Texas Mary Hicks and husband Brian, of Hayesville, Kansas Mother; June Hogsett, of Drummond, Oklahoma Mother and Father in law; Robert and Sheryl Duffy, of Owasso He was preceded in death by his father, Robert. Memorial service will be held at 2:00 p.m. Tuesday, August 13, 2019 at the Mowery Funeral Service Chapel in Owasso with Reverend Leonard Pirtle officiating. In lieu of flowers the family requests donations be made in Rick’s memory to National EMS Memorial Foundation, 535 Main Street, Stoneham, MA 02180. Arrangements and services were entrusted to Mowery Funeral Service of Owasso.

The family of Richard "Rick" Lee Hogsett created this Life Tributes page to make it easy to share your memories.

Send flowers to the Hogsett family.