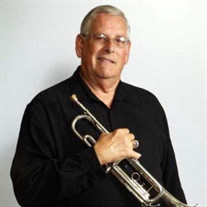 Richard Earle Tockey was born December 24, 1946, in Hutchinson, Kansas, to Earle Joseph and Mildred Leon Slater Tockey. He died Thursday, January 14, 2021, in Tulsa, Oklahoma, at the age of 74 years. Richard was reared and educated in Hutchinson and graduated with the Hutchinson High School Class of 1964. He continued his education at Wichita State University in Wichita, Kansas, where he earned his Bachelor of Arts Degree in music education. Richard was a veteran of the armed forces having served his country honorably with the United States Army. He spent most of his working life as a sales representative with Sara Lee Bakery Group, formerly Rainbo Bread. He had lived in Owasso, Oklahoma from 1989 to 2000 before moving to live in Memphis, Tennessee. He was a faithful member of Bellevue Baptist Church in Cordova, Tennessee. He moved back to Owasso in 2008 where he and his family have lived since that time. Richard was an accomplished musician who enjoyed music and playing the trumpet. He also enjoyed traveling, but especially just spending time with his family, and of course his role of “Grandad”. Those he leaves behind who hold many cherished memories include: His wife; Joyce, of the home Children; Denise Wilkerson, of Owasso, Oklahoma Scott Tockey and his wife Teresa, of Lexington, Kentucky Michael Tockey, of Owasso, Oklahoma Danny Tockey and wife Jenna, of Bixby, Oklahoma Grandchildren; Kayla Wilkerson Peyton, J.D., and Hunter Tockey Lisa Hanus Beth Gann Great grandchildren; Llana Holland and Charlotte Gann Sister; Georgene Clark, of Melbourne, Florida He was preceded in death by his parents. Visitation will be held from 4:00 p.m. to 8:00 p.m. Wednesday, January 27, 2021, at Mowery Funeral Service in Owasso. Funeral service will be held 1:00 p.m. Thursday, January 28, 2021, at the Mowery Funeral Service Chapel. Committal service and interment will follow at Floral Haven Memorial Gardens in Broken Arrow, Oklahoma. Arrangements and services were entrusted to Mowery Funeral Service of Owasso. www.moweryfs.com

Richard Earle Tockey was born December 24, 1946, in Hutchinson, Kansas, to Earle Joseph and Mildred Leon Slater Tockey. He died Thursday, January 14, 2021, in Tulsa, Oklahoma, at the age of 74 years. Richard was reared and educated in Hutchinson... View Obituary & Service Information

The family of Richard Earle Tockey created this Life Tributes page to make it easy to share your memories.

Send flowers to the Tockey family.