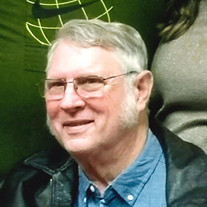 Robert “Bob” Lockett Baldwin was born on May 18, 1947 in Americus, Georgia to Arthur Wooten Baldwin and Wilma Virginia (Lockett) Baldwin. He was the second of three boys: Butch, Bobby, and Don. He died on Friday, January 21, 2022 in Tulsa, Oklahoma at the age of 74 years. Bob was raised and educated in Dawson, Georgia and graduated high school from Lyman Ward Military Academy in Camp Hill, Alabama. He enlisted and served his country honorably in the United States Air Force where he served in Viet Nam. After returning home, he earned his A&P Mechanics license from South Georgia Technical Vocational School in Americus. He was married on December 18, 1971 in Dawson, Georgia to Donna “Susan” (Boyd). After graduation, Bob accepted a job with Grumman American where he worked until 1978 when he was sent to Jeddah, Saudi Arabia to fix an airplane. Once there, he was offered a job with Dallah Avco. The family moved to Jeddah where they lived for six years. While there, Bob and Susan joined The Church of Jesus Christ of Latter-Day Saints in 1980 and had the special opportunity to be baptized in the Red Sea. Once they returned to the States in 1984, Bob accepted a job with American Airlines and the family settled in Owasso where they have lived for the past 37 years. Bob was an aircraft mechanic for American Airlines for almost 25 years when he retired in 2008. He loved riding his Gold Wing motorcycle. His brother got him interested in turning pens on a lathe, and he got very proficient in the hobby, many times giving a pen to a young man going on a mission and teaching them a lesson about the pen. He was a good cook and practiced gardening. He loved cutting the grass on a stand-up riding mower. His favorite activity for the past 13 years was working in the Temple in Oklahoma City. Those he leaves behind who hold many cherished memories include; His wife of 50 years - Susan Baldwin 5 Children - Donna Jay and husband Ed Andrew Baldwin and wife Shocis Kathy Nuttall and husband Brett Robyn Langston and husband Joshua David Baldwin and wife Nichole 18 Grandchildren Brother- Arthur “Butch” Baldwin and wife Martha He was preceded in death by his parents, Arthur and Wilma, and his brother, Don. A memorial service will be held 11:00 a.m. on Friday January 28, 2022, at the Church of Jesus Christ of Latter-Day Saints in Owasso. In lieu of flowers, the family requests memorial donations be made in Bob’s memory to The Church of Jesus Christ of Latter-day Saints Temple Building Fund, Attention Bishop Stephen Kile, 13823 E 104th Ct. N., Owasso, OK 74055.

The family of Robert "Bob" Lockett Baldwin created this Life Tributes page to make it easy to share your memories.

Send flowers to the Baldwin family.