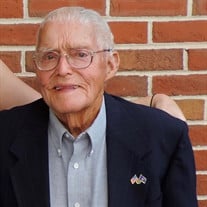 Robert “Bob” Bates Cleary was born November 23, 1926 in Zanesville, Ohio, to William Kyle Cleary and Minnie (Bates) Cleary. He peacefully passed in the comfort of his own home on Sunday, October 14, 2018, in Owasso, Oklahoma, at the age of 91 years. Bob was raised and educated in Zanesville and graduated with the Zanesville High School Class of 1944. After high school he enlisted and served in the United States Armed Forces as a Merchant Marine. After being honorably discharged, Bob met and married Norma Jean (Downing) Cleary in Toledo, Ohio on June 19, 1954. They moved to Owasso in 1974. He spent most of his working life as a welder; he owned and operated Cleary’s Custom Welding. Bob has been a faithful member of First Church in Owasso since 1980. He had a variety of past times such as gardening and working outdoors, traveling with Norma to all 50 states in their RV, being out on the water and fishing, attending his grandchildren’s sporting events as well as being a long time Owasso Rams fan, and doing anything he could to help others. Those he leaves behind who hold many cherished memories include: Wife: Norma Cleary, of Owasso 3 Sons: Bill Cleary and wife Rildia, of Collinsville Tom Cleary, of Owasso Steve Cleary and wife Sandy, of Collinsville 1 Daughter: Carol McClendon and husband Jerry, of Flowery Branch, Georgia 1 Daughter-in-Law: Marcy Cleary 10 Grandchildren and 10 Great Grandchildren He was preceded in death by his parents, Kyle and Minnie, 2 brothers, Paul and John, and 1 sister, Laura. Visitation will be held 5:00 p.m. to 7:00 p.m. on Monday, October 15, 2018 at Mowery Funeral Service. The funeral service will be held at 10:00 a.m. on Tuesday, October 16, 2018 at The Mowery Funeral Service Chapel in Owasso with Pastor Ben Killion officiating. Interment and family graveside service will follow at Graceland Memorial Park Cemetery in Owasso, Oklahoma. In lieu of flowers, the family requests that memorial donations be made in Bob’s memory to First Church Owasso, 10100 North Garnett Road, Owasso, Oklahoma 74055. Arrangements and services were entrusted to Mowery Funeral Service of Owasso. www.moweryfs.com

The family of Robert "Bob" Bates Cleary created this Life Tributes page to make it easy to share your memories.

Send flowers to the Cleary family.