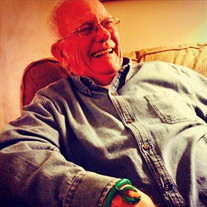 Robert Graham Hines, Jr., was born December 29, 1938, in Fort Smith, Arkansas, to Robert Graham Hines, Sr., and Marie Elizabeth Brun. He died Saturday, July 25, 2020, in Tulsa, Oklahoma, at the age of 81 years. Robert was reared and educated in Fort Smith and graduated with the St. Anne’s Academy in 1956. He continued his education at Fort Smith Junior College. Robert was married Jun 21, 1958, in Fort Smith to Carol Jane Clawson. They had made their home in Tulsa, Oklahoma, before moving to Owasso in 1973. Robert worked in retail sales for Owasso Wine and Liquor for over 25 years. He enjoyed a variety of pastimes including going quail hunting or just relaxing reading a good book. He was proud in keeping his yard in immaculate condition. He was an avid baseball fan of the St. Louis Cardinals. He especially loved his family and was extremely fond of his role as “Gran Gran” to his grandchildren and great grandchildren. Those he leaves behind who hold many cherished memories include: His wife of over 62 years; Carol, of the home Children; Robert Hines III and wife Kelly Jo, of Owasso, Oklahoma Jane Ann Ramirez and husband Doug, of Collinsville, Oklahoma David Hines and wife Loretta, of Topeka, Kansas Six grandchildren; Hanna Hines, Clare Hines, Nick Lee Ramirez, Anne Marie Ramirez Avery Hines, and Olivia Hines Three great grandchildren; Holly Jo Fansler, Neal Charles Fansler, and Elliott McMahan He was preceded in death by his parents, and one sister, Marilyn Marie Carter. Funeral service will be held 2:00 p.m. Friday, July 31, 2020, at the Mowery Funeral Service Chapel in Owasso with Pastor Leonard Pirtle officiating. Private family disposition will be held at a later date. The family requests memorial contributions be made to the Ward-Wiseman Animal Haven, 15628 North 129th East Avenue, Collinsville, Oklahoma, 74021. Arrangements and services were entrusted to Mowery Funeral Service of Owasso. www.moweryfs.com

The family of Robert Graham Hines Jr. created this Life Tributes page to make it easy to share your memories.

Send flowers to the Hines family.