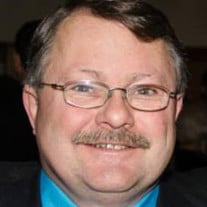 Robert “Bob” Bruce Linder was born January 12, 1960, in El Centro, California to Elbert Elmer “Al” Linder and Helen Louise (John) Linder. He died Monday, March 9, 2020, in Tulsa, Oklahoma, at the age of 60 years. Bob moved to Owasso in the 8th grade where he completed his secondary and graduated with the Owasso High School Class of 1978. Bob attended Oral Roberts University, University of Oklahoma and graduated from Oklahoma State University with a degree in Biology, Chemistry and Premed. He was accepted into OU School of Medicine, but choose to teach Science for a “few Years”. Those few years became a passion for teaching Science that lasted 34 years at Owasso Public Schools where he retired in 2017. He was married in Owasso on August 9, 1980 to Ann Marie (Stout) Linder. He was an active member at First Church in Owasso since 1973 where he served as a Sunday school teacher, lead a Saturday morning men’s bible study, and was head of the Missions Team. He was a sponsor/advisor for Great Books, Chess Club. Academic Bowl, Bible Bowl, Odyssey of the Mind, Science Club, State Department of OK, Math Improvement Program, and Youth Missions. He enjoyed a variety of past times such as reading, gardening/yard work, conducting science experiments at home to prepare for school, hiking with his brothers, and tutoring at the Baptist Children’s Home. Those he leaves behind include: Wife; Ann Linder, of Owasso 3 Children; Sarah Linder, of Owasso Jennifer Footle and husband David, of Denver, Colorado David Linder and wife Jennifer, of Savannah, Georgia 1 Granddaughter; Sophia Linder Father; Al Linder of Watsonville, California 3 Brothers; Patrick Linder and wife Peggy, of Prescott, Arizona Michael Linder and wife Betsy, of Columbus, Ohio Paul Linder and wife Carrie, of Bakersfield, California 1 Sister; Pam Riker and husband Gary, of Lewisville, Texas 2 Brother-in-Laws Danny Stout and wife Pam, of Owasso, Oklahoma Tim Stout and wife Rhonda, of Owasso, Oklahoma Numerous nieces, nephews, uncles, aunts, family and church family. He was preceded in death by his mother, Helen, and Parents in law Jack and Paula Stout. Visitation will be held 2:00 p.m. to 5:00 p.m. Sunday, March 15, 2020 at the Mowery Funeral Service Chapel in Owasso. Funeral service will be held 11:00 a.m. Monday, March 16, 2020, at First Church in Owasso with Pastor Ben Killion officiating. In lieu of flowers, the family requests memorial donations be made in Bob’s memory to https://partnerhub.omf.org/fundraisers/In-Memory-of-Bob-Linder or http://oklahomaom.com/robert-bob-linder. Arrangements and services were entrusted to Mowery Funeral Service of Owasso. www.moweryfs.com

The family of Robert Linder created this Life Tributes page to make it easy to share your memories.

Send flowers to the Linder family.