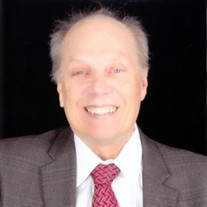 Robert Edward Price was born on March 19, 1948 in Oklahoma City to James Price and Wanda (Hogue) Price. He passed away on Friday, May 15, 2020, in Tulsa, Oklahoma, at the age of 72 years. Bob was raised in Moore, Oklahoma and graduated from Moore High School in 1966, where he was the Senior Class President. He earned a B.S. in Political Science in 1970 and a Juris Doctorate in 1973, both from the University of Oklahoma. In his professional career, Bob held judicial posts in Leflore County, Atoka County and Rogers County (12th Judicial District). Bob practiced as a private attorney for 47 years. During that time, he served as County Bar President and delegate to the Oklahoma Bar Convention from LeFlore, Atoka, and Rogers counties. Bob was awarded the Tri-County CASA Attorney of the Year Award in 1998. Bob married the love of his life, Donna Marie (Thomas) Price on February 15, 1985. Throughout his life, Bob enjoyed a variety of pastimes such as coaching his children’s sports teams, attending OU football games, traveling, and, most of all, spending time with his grandchildren. Bob attended church his entire life and served several years as his children’s Sunday School teacher. He spent the last 13 years attending Memorial Heights Baptist Church in Claremore. Those he leaves behind, who hold many cherished memories, include: His Wife: Donna Price, of Claremore, Oklahoma; 8 Children: Kevin Price of Denver, Colorado Jeff Price and wife Loretta, of Claremore, Oklahoma Brent Price and wife Chanda, of Muldrow, Oklahoma Natallie Stanley, of Atoka, Oklahoma Rob Price and wife Molly, of Andover, Kansas Tyler Price and wife Amie, of Broken Arrow, Oklahoma Rachel Price, of Claremore, Oklahoma Alli Price, of Claremore, Oklahoma; 17 Grandchildren; Sister: Patti Lynn and husband, Gary, of Goldsby, Oklahoma; and Mother: Wanda Price, of Moore, Oklahoma He was preceded in death by his father, James. A memorial service will be held at 2:00pm on Friday, May 29, 2020 at Memorial Heights Baptist Church in Claremore, Oklahoma with Pastors Mark Smith and Paul Simpson officiating. https://www.facebook.com/mhbcclaremore/. Arrangements and services were entrusted to Mowery Funeral Service of Owasso.

Robert Edward Price was born on March 19, 1948 in Oklahoma City to James Price and Wanda (Hogue) Price. He passed away on Friday, May 15, 2020, in Tulsa, Oklahoma, at the age of 72 years. Bob was raised in Moore, Oklahoma and graduated from... View Obituary & Service Information

The family of Robert E. Price created this Life Tributes page to make it easy to share your memories.

Send flowers to the Price family.