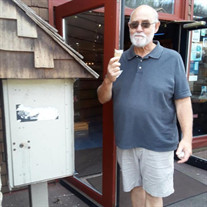 Robert “Bob” E. Zibell was born on September 26, 1954 in Albany, New York to Robert Edward Zibell, Sr. and Patricia (Gaul) Zibell. He died on Tuesday, February 9, 2021 in Muskogee, Oklahoma at the age of 66. Bob was raised in Albany, New York. He then enlisted and served his country honorably in the United States Navy. Bob was married on January 31, 1977 in Annapolis, Maryland to Gail Christine (Daily) Zibell. After having three children, Bob and Gail moved to Owasso, Oklahoma in 1984. Bob earned his Bachelor of Science degree from Northeastern State University in Tahlequah, Oklahoma. He spent most of his working life as an aerospace engineer with Rockwell and Boeing in Tulsa, totaling over 40 years in the industry. In his spare time, Bob enjoyed hunting, fishing, gardening, bird watching, and carpentry work. Those he leaves behind who hold many cherished memories include: His wife; Gail Zibell 3 Children; Chris Zibell Michael Zibell Kelly Zibell 4 Grandchildren; Morgan, Carter, Riley, Marshall 2 Sisters; Wendy Downy Laurie Zibell Coleman He was preceded in death by his parents, Robert and Patricia, his brother, Brian, and his daughter-in-law Brandi (Stone) Zibell. Visitation will be held from 1:00 p.m. to 4:00 p.m. on Wednesday, February 17, 2021 at Mowery Funeral Service in Owasso. Private family interment will be held on a later date at Ridgelawn Cemetery in Collinsville, Oklahoma.

The family of Robert "Bob" E. Zibell created this Life Tributes page to make it easy to share your memories.

Send flowers to the Zibell family.