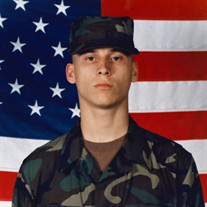 Rodger Lawrence Rundenza Jr., born on October 7, 1984, in Washington D.C. to Rodger Lawrence Rundenza and Cathy Marie (Griffen) Filcek. Passed away Saturday, January 1, 2022, at the age of 37 years. Rodger grew up traveling back and forth from Tennessee and Maryland. At the age of 18 he enlisted in U.S. Army as an infantry man and was stationed in Ft. Polk, Louisiana. He was assigned to D Company 2-4 (4th BDG, 10th Mountain Division). During his service Rodger was deployed to Afghanistan and survived an IED attack. Shortly after his return home Rodger was released from the military, but remained in Ft. Polk, LA where he met his wife Meghan. It was love at first sight. Shortly after meeting they moved to Oklahoma to raise their family. Rodger and Meghan Nicole (Casares) Rundenza married on March 30, 2013, in Eureka Springs, Arkansas. Upon marrying Meghan, Rodger came into the lives of Kale Spradlin at the age of 5, and Talan Spradlin at the age of 1. From the moment he met the boys he told everyone they were his sons. He taught Talan his first word “faster’”. Rodger loved being a father and couldn't wait to have a house full of children. When they welcomed their daughter Kinley Rundenza he gave her the name “baby bear”, he was only allowed to call her by this nickname when her friends weren’t around. When they welcomed their son “Trey” Rodger Rundenza III, their family was complete. He was so excited to pass his name down and would not let him have any other name. Rodger enjoyed helping coach and being on the side lines cheering for all four of his children. Whether it was football, soccer, wrestling, or being a cheer dad. He could often be seen doing the cheers in the stands. He was at every school function, going on field trips and greeting his children before and after school. Rodger was always willing to help others, he spent many hours working on cars, even teaching Kale and his friends all he knew. Rodger had a smile that could light up any room and he made sure to always give a hug and an “I love you”, no matter who it was. Being his friend, you knew he genuinely cared about you he didn't just consider you a friend but family. He loved being “Uncle Rod’ not only to his nieces and nephews, but to his closest friends’ children as well. Rodger was a faithful member of New Life Assembly Church in Collinsville, Oklahoma. He served in Children’s Ministry and on the Praise and Worship team where he blessed so many with his voice. In his spare time, Rodger enjoyed a variety of past times including fishing with friends, working on cars, drifting, and playing video games. He also had a passion for cooking especially Japanese foods and made the best fried rice. Those he leaves behind who hold many cherished memories include: His wife; Meghan Rundenza 5 Children; Kale Spradlin Talan Spradlin Kinley Rundenza Rodger III “Trey” Rundenza Alyssa Brown Parents; Rodger Rundenza and wife Evelyn Cathy Filcek and husband Steve Siblings; Travis Rundenza and wife Ashleigh Danielle Mannix and husband Vinny Christy Reyes Giselle DiFrancesco and husband Chris Melissa Filcek Ashley Filcek Roger Filcek A memorial service will be held 11:00 a.m. on Monday, January 10, 2022, at New Life Assembly Church in Collinsville, Oklahoma. In lieu of flowers, the family request donations be made in Rodger’s memory to the family Go Fund Me account at https://gofundme/cce07a97 or New Life Assembly Church, 12215 North Garnett Road, Collinsville, OK 74021.

The family of Rodger Lawrence Rundenza, Jr. created this Life Tributes page to make it easy to share your memories.

Send flowers to the Rundenza family.