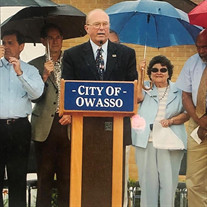 Rodney J. Ray was born October 3, 1946 in McAlister, Oklahoma to J.B. Ray and Mary “Elizabeth” (Self) Ray. He passed from this life Thursday, July 30, 2020 in Owasso, Oklahoma t the age of 73 years. Rodney was raised and educated in Kiowa, Oklahoma and graduated with the Kiowa High School Class of 1964. After high school, he briefly attended classes at Oklahoma State University in Stillwater, Oklahoma, but decided to enlist in the United States Army. Rodney served his country honorably in Vietnam, earning two purple heart medals and a bronze star medal. After returning from Vietnam, he married his first wife, Paula Sue (Adams) Ray and had two children, Russell and Robin. He graduated with a bachelor’s in Political Science from Northeastern State University in Tahlequah, Oklahoma in 1971. Rodney later married Karen Sue (Hannah) Ray. He and Karen have made Owasso their home since 1985. Rodney spent most of his working life as the City Manager in Owasso for almost 30 years. He was a faithful and active member at Freedom Church in Owasso for the past 20 years. Rodney enjoyed a variety of pastimes such as tooling around in his GM convertible, gardening, trap shooting, and entertaining his grandkids and family. Rodney was passionate about public service and was quick to share the Starfish Story, a story about changing the world one small step at a time, with anyone who had never heard of its lesson. The lesson was this: You might not be able to change the entire world, but you can change a small part of it, for someone. Rodney told the story in a thoughtful and meaningful way. After graduating from Northeastern State University, Rodney joined Oklahoma Congressman Ed Edmondson’s staff, where his career in public service and politics began. He later served as Oklahoma’s Community Development Director before being named City Manager of Jenks in 1976. In 1982, Rodney was a candidate for Oklahoma Lieutenant Governor. His campaign slogan: “Ray is the Way for Oklahoma.” But Rodney’s greatest professional achievement began in 1986, when he was named City Manager of Owasso. For nearly 30 years, he led Owasso’s transformation from a small struggling town to the prosperous and burgeoning city it is today. He used his great understanding of the mechanics of government to secure funding for needed infrastructure and to attract the attention and investments of businesses. The City of Owasso recently wrote: “Rodney focused his efforts, energy and vision on providing a solid foundation for public safety, basic infrastructure and fiscal stability for Owasso… Many of the philosophies and programs he started are still foundational today in setting Owasso apart from other Oklahoma cities and towns.” Those he leaves behind who hold many cherished memories include: Wife; Karen Ray, of Owasso 4 Children; Russell Ray and wife Deborah, of Edmond Robin Heath and husband Kevin, of Elbe, Washington Heather Johnson and husband Brett, of Sand Springs Chad Poston and wife Michelle, of Talala 12 Grandchildren; Jacob, Daniel, Austin, Blake, Dylan, Makenzie, Presley, Ella, Matt, Amanda, Chase, and Noah 5 Great Grandchildren 3 Sisters; Cynthia Schooley, of Tahlequah Kathy Hewlett, of Tulsa Mary Davis and husband Randy, of Tahlequah Brother; Jim Ray and wife Polly, of Kiowa He was preceded in death by his parents, J.B. and Elizabeth, and his sister, Judy. A memorial service will be held 10:00 a.m. Tuesday, August 4, 2020 at Freedom Church in Owasso with Pastor Andrew Rankin officiating. In lieu of flowers, the family requests memorial donations be made in Rodney’s memory to Freedom Church, 9602 N. 177th E. Ave, Owasso, OK 74055 or Follower of One, P.O. Box 101, Owasso, OK 74055. The family also requests that masks be worn at the service. Arrangements and services were entrusted to Mowery Funeral Service.

The family of Rodney J. Ray created this Life Tributes page to make it easy to share your memories.

Send flowers to the Ray family.