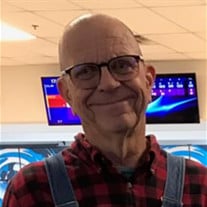 Rodney Anthony “Goober” Wood was born on November 28, 1946 in Artesia, New Mexico to June Carl Wood and Bernadette Marion (Lewis) Wood. He passed from this life on Saturday, December 29, 2018 in Collinsville, Oklahoma at the age of 72. Goober was raised and educated in Artesia and graduated with the Artesia High School Class of 1966. After high school he enlisted and served his country honorably in the United States Navy. He was married to Glenda Irene (Dick) Wood at Glenda’s parent’s house in Owasso, Oklahoma on January 27, 1979. Goober spent most of his working life as a lineman for Verdigris Valley Electrical Company and retired after 39 years. After retirement he worked several years for H and H Muffler in Collinsville. Goober was a proud member of the Collinsville VFW. He had a variety of pastimes such as tournament bass fishing, camping with Glenda, anything outdoors such as chopping wood and shooting guns, and watching Oklahoma Sooner football. Those he leaves behind that hold many cherished memories include: Wife; Glenda Wood, of Collinsville 3 Children; Karl Wood and wife Lisa, of Independence, Kansas Kristy Frazier, of Owasso D’Andra Wood, of Collinsville 9 Grandchildren; Ethan, Kimberly, Tabatha, Morgan, Averyn, Harmony, Landry, Aniyah, and King 2 Brothers; Terry Wood and wife Dorothy, of Dewey, Oklahoma Tommy Wood and wife Janet, of Santa Fe, New Mexico He was preceded in death by his parents, June and Bernadette. Memorial Service will be held 10:00 a.m. Friday, January 4, 2019 at the Mowery Funeral Service Chapel in Owasso with Pastor Joe Goodin officiating. Interment will be held at Rest Haven Cemetery in Sperry, Oklahoma. In lieu of flowers the family requests that donations be made in Rodney’s memory to Cancer Treatment Centers of America, 10109 East 79th Street, Tulsa, Oklahoma 74133. Arrangements and services were entrusted to Mowery Funeral Service of Owasso.

Rodney Anthony &#8220;Goober&#8221; Wood was born on November 28, 1946 in Artesia, New Mexico to June Carl Wood and Bernadette Marion (Lewis) Wood. He passed from this life on Saturday, December 29, 2018 in Collinsville, Oklahoma at the age... View Obituary & Service Information

The family of Rodney A. "Goober" Wood created this Life Tributes page to make it easy to share your memories.

Send flowers to the Wood family.