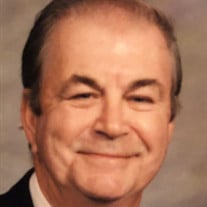 Ronald Lloyd Crain was born April 13, 1933, in Hominy, Oklahoma, to Vic Crain and Mittie (Waters) Smith. He passed from this life on Wednesday, May 15, 2019, in Collinsville, Oklahoma, at the age of 86 years. Ronald was raised and educated in Hominy and graduated with the Hominy High School Class of 1950. After high school he enlisted and served his country honorably in the United States Marine Corps. Ronald was married May 14, 1955, in Muskogee, Oklahoma to Helen Marie (Flinn) Crain. They were lovingly married for 52 years before her passing. He spent most of his working life as an electrician with Corning Glass Works in Muskogee. Ronald moved to Owasso in March of 2000 and attended Bethel Baptist Church until his health began to decline. He had a variety of past times such as playing dominoes, reading, boating and fishing on Lake Tenkiller, and watching his beloved St. Louis Cardinals and Oklahoma Sooners. Those he leaves behind who hold many cherished memories include: 3 Daughters; Deborah Jones and husband Scott, of Owasso Jill Klein Gipson and husband Mike, of Tulsa Cindy Robinson and husband Randy, of Centerton, Arkansas 5 Grandchildren; Jessica Klein Barton and husband Jeremy, of Tulsa Corey Robinson and wife Erin, of Edmond Mary Kyle Nease and husband Wilson, of Collinsville Luke Jones and fiancé Amandalyn Christian of Owasso Daniel Jones, of Owasso 4 Great Grandchildren; Adler, Stone, Luca, and Lochlan 4 Brothers; Raymond Smith and wife Dorothy Victor Crain John Smith and wife Susie Jerry Smith and wife Mona 4 Sisters; Virginia Todd and husband Lloyd Oleta Leonard Vickie Mozingo and husband Thomas Crystal Hutlas and husband Ed He was preceded in death by his parents, Vic and Mittie, wife, Helen, 2 brothers, Charles and Warren, and 3 great grandchildren, Nathan, Sunny, and Lottie. Visitation will be held from 9:30 a.m. to 10:30 a.m. Tuesday, May 21, 2019, and Funeral Service will be held at 10:30 a.m. Tuesday, May 21, 2019, both at the Mowery Funeral Service Chapel in Owasso with Reverend Leonard Pirtle officiating. Arrangements and services were entrusted to Mowery Funeral Service of Owasso.

Ronald Lloyd Crain was born April 13, 1933, in Hominy, Oklahoma, to Vic Crain and Mittie (Waters) Smith. He passed from this life on Wednesday, May 15, 2019, in Collinsville, Oklahoma, at the age of 86 years. Ronald was raised and educated... View Obituary & Service Information

The family of Ronald Lloyd Crain created this Life Tributes page to make it easy to share your memories.

Send flowers to the Crain family.