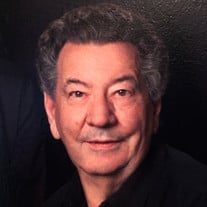 Ronald Orson Mannbeck was born November 13, 1932 in Omaha, Nebraska to Henry D. Mannbeck and Inez (Pollard) Mannbeck. He passed from this life on Saturday, December 28, 2019 in Owasso, Oklahoma at the age of 87. Ron was raised and educated in Greenwood, Nebraska until his Junior year when he moved to West Plains Missouri and graduated with the West Plains High School Class of 1950. After high school he enlisted and served his country honorably in the United States Navy Air Force. Ron was married on December 1, 1956 in Pomona, Missouri to Gladys “Irene” (Carver) Mannbeck. He spent most of his working life as the owner and operator of St. Charles Auto Wash in St. Charles, Missouri. Ron retired in 1986 and moved to Owasso, Oklahoma to be closer to his daughter, Marisa. He was a faithful member of New Heights Church in Owasso for over 15 years. He enjoyed a variety of past times such as hunting, fishing, working crossword puzzles, watching the St. Louis Cardinals on tv, and attending his grandchildren’s sporting events. Those family members he leaves behind include: Wife; Irene Mannbeck, of Owasso Daughter; Marisa Burgess and husband Lee, of Owasso 4 Grandchildren; Kyle Burgess, of Germany Nathanael Burgess and wife Kalle, of Catoosa Erika Koprivnik and husband Mike, of Painesville, Ohio Chelsea Burgess, of Claremore 4 Great Grandchildren; Allwynn Burgess, Harper Koprivnik, Elira Burgess, and Darci Koprivnik. Twin Brother; Donald Mannbeck and wife Betty, of St. Charles, Missouri Sister; Janice Miller, of Independence, Missouri He was preceded in death by his parents, Henry and Inez, son, Ronald Alan, and sister, Emily. Visitation will be held 4:00 p.m. to 8:00 p.m. on Thursday, January 2, 2020 at Mowery Funeral Service in Owasso. Funeral Service will be 9:30 a.m. on Friday, January 3, 2020 at New Heights Church in Owasso with Pastor John Stolz officiating. Graveside Service will be held at 3:30 p.m. on Friday, January 3, 2020 at Howell Memorial Cemetery in Pomona, Missouri. In lieu of flowers, the family requests memorial donations be made in Ron’s memory to Paralyzed Veterans of America, P.O. Box 758589, Topeka, Kansas 66675-9950. Arrangements and services were entrusted to Mowery Funeral Service of Owasso.

Ronald Orson Mannbeck was born November 13, 1932 in Omaha, Nebraska to Henry D. Mannbeck and Inez (Pollard) Mannbeck. He passed from this life on Saturday, December 28, 2019 in Owasso, Oklahoma at the age of 87. Ron was raised and educated in... View Obituary & Service Information

The family of Ronald Orson Mannbeck created this Life Tributes page to make it easy to share your memories.

Send flowers to the Mannbeck family.