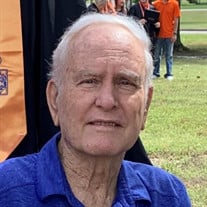 Ronald Van Smith was born on July 2, 1937, in Willow, Oklahoma, to Jewel Theodore “J.T.” Smith and Ninaleen (McCaskel) Smith. He died on Wednesday, August 5, 2020, in Tulsa, Oklahoma, at the age of 83 years. Ron was raised and educated in Ocina, Oklahoma and graduated with the Ocina High School Class of 1955. He went on to further his education with a bachelor’s degree in Education from Southwestern Oklahoma State University in Weatherford, Oklahoma and earned his master’s degree in Administration from Central State University in Edmond, Oklahoma. Ron was married June 2, 1961 in Weatherford, Oklahoma to Doris June (Back) Smith. The first five years of his career he taught at Putnam City Central, Oklahoma City, Oklahoma. Then spent the rest of his working career in Civil Service with the Department of Interior, moving to parts of Idaho, New Mexico, then to Lawton, Oklahoma. After retiring in 2004 he then moved to Owasso, Oklahoma. Ron has been a faithful member at Owasso First Baptist since moving to the area. Those he leaves behind who hold many cherished memories include: Wife; Doris Smith, of Owasso Son; Kyle Smith and Fiancé Courtney Harter, of Bixby 3 Grandsons; Hunter Smith, of Owasso Baylor Smith, of Owasso Gage Smith, of Owasso Brother; Dwayne Smith, of Farmersville, Texas Daughter in Law; Tricia Smith, of Owasso 2 Sisters; Shirley Grumman, of Sapulpa Wyna Stehr and husband Bill, of Willow He was preceded in death by his parents, J.T. and Ninaleen, sister, Edwina, and son, Kurt.

The family of Ronald Van Smith created this Life Tributes page to make it easy to share your memories.