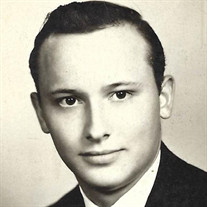 Ronald Eugene “Ron” Thompson was born May 19, 1936, in Wichita, Kansas, to Harold Preston Thompson and Eva Marie Stull Thompson. He died Monday, August 6, 2018, in Catoosa, Oklahoma, at the age of 82 years. Ron was raised and educated in Wichita, Kansas, and Tulsa, Oklahoma, and graduated with the Will Rogers High School Class of 1954. He continued his education at the University of Oklahoma where he earned his degree in business administration. He later attended the University of Tulsa. Ron was married March 28, 1958, in Lexington, Oklahoma, to Virginia Lee Coffman. He served his country honorably with the United States Air Force. He spent most of his working life as an accountant with American Airlines in Tulsa. He was strong in his faith and attended Immanuel Baptist Church in Tulsa and then Garnett Road Baptist Church in Tulsa. Ron enjoyed a wide variety of pastimes including fishing, golfing, traveling, and camping, especially to Colorado. He coached and watched his sons in sports including football, baseball, and basketball. He was also a proud spectator of his daughters in gymnastics, diving, softball, and cheerleading. Ron served as an usher for the University of Tulsa Golden Hurricane at the time when they played at the Tulsa Expo Pavilion. He was a very passionate fan of the University of Oklahoma Sooners, all sports, but very passionate about football. He was so much a fan, the family has asked attendees wear OU attire or their favorite college to his service. P.S., he wasn’t fond of the Texas Longhorns. Those he leaves behind who hold many cherished memories include: His loving wife for over 60 years; Virginia, of the home Four children; Gary Thompson and wife Cindy, of Owasso Darla Thompson Spears, of Franklin, Tennessee Deanne Vick and husband John, of Broken Arrow, Oklahoma Rick Thompson, of Owasso Grandchildren; Christina Spears, Andrew Carter, Allison Spears, Jacob Carter, John Vick, Braden Thompson, Josh Vick, and Chandler Thompson Sister; Carolynn Davidson He was preceded in death by his parents. A Celebration of Life service will be held 10:30 a.m. Monday, August 20, 2018, at the Garnett Road Baptist Church in Tulsa with Phil Dark and Steve Wasson officiating. Private family disposition will be held at a later date. The family requests memorial contributions be made to the John 3:16 Mission, P.O. Box 1477, Tulsa, Oklahoma, 74101-1477, or the Folds of Honor Foundation, 5800 North Patriot Drive, Owasso, Oklahoma, 74055, or Ronald McDonald House of Tulsa, 6102 South Hudson Avenue, Tulsa, Oklahoma, 74136. Arrangements and services were entrusted to Mowery Funeral Service of Owasso. www.moweryfs.com

The family of Ronald Eugene "Ron" Thompson created this Life Tributes page to make it easy to share your memories.

Send flowers to the Thompson family.