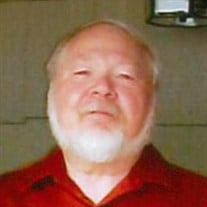 Ronnie Harold Merrill was born August 17, 1950, in Sallisaw, Oklahoma, to Harold Lloyd and Eva Marie Rowland Merrill. He died Monday, March 16, 2020, in Tulsa, Oklahoma, at the age of 69 years. Ronnie completed his secondary education in Jenks, Oklahoma, and graduated with the Jenks High School Class of 1969. He continued his education attending Northeastern State University in Tahlequah, Oklahoma. He was a veteran of the armed forces having served his country honorably with the United States Navy for eight years as an electronics technician. It was during this time he was married May 7, 1975, in Subic Zambales, Philippines, to Rita Penafiel. After his military service and return stateside. Ronnie began a 42-year career as an operations dispatcher with PSA/AEP. He enjoyed a variety of pastimes including reading science fiction books and watching classic Western movies. He was an avid football fan and especially enjoyed watching the Oklahoma Sooners. Those he leaves behind who hold many cherished memories include: His wife of over 44 years; Rita, of the home Two sons; Garett Merrill and Nick Merrill, both of Owasso Three granddaughters; Victoria Paige, Kaydence Christina, and Emberly Marie Two brothers; Doug Merrill, of Arkansas, and Russell Merrill, of Claremore, Oklahoma Father; Harold Merrill and wife Betty, of Wichita, Kansas He was preceded in death by his mother, Eva Merrill, and a son, Brian Merrill Visitation will be held from 4:00 p.m. to 8:00 p.m. Friday, March 20, 2020, at Mowery Funeral Service in Owasso. Funeral service will be held 11:00 a.m. Saturday, March 21, 2020, at the Mowery Funeral Service Chapel with Father Matt LaChance officiating. Final resting place will be at Fairview Cemetery in Owasso. Arrangements and services were entrusted to Mowery Funeral Service of Owasso. www.moweryfs.com

The family of Ronnie Harold Merrill created this Life Tributes page to make it easy to share your memories.

Send flowers to the Merrill family.