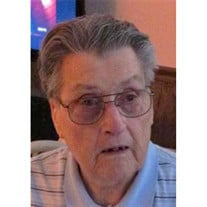 ' Roy Lee Blackwell, Jr., resident of Collinsville, passed from this life on Tuesday, January 17, 2017 in Tulsa. He was 81 years of age. Roy was born January 11, 1936 in Chicago, IL to Roy Lee and Irene (Lockhart) Blackwell, SR. He was raised and received his education in Chicago, graduating from Mt. Carmel high school. He later received his master's degree. On July 11, 1981, Roy and Linda Sue Hamson were united in marriage at Worth, Illinois. Following their marriage, they made their home in Illinois for six years before moving to Oregon. In 2000, they moved to Oklahoma. His wife Linda, passed away in 2006. Roy worked in the trucking industry for most of his life. He was active with Meadowcreek United Methodist Church; was an avid bowler (a Pro Bowler at one time); enjoyed playing poker and spending time with his family, especially his dog Ellie. Those that survive include his son Ã¢â‚¬â€œ Brian Patete of Collinsville; two granddaughters Kristle and Kaylee; and his siblings Ã¢â‚¬â€œ Donna Palma of Frankfort, Illinois, Carolynn Seaton of Burbank, CA, Alan Blackwell of Salem, Oregon and Ina Blackwell of Tillamook, Oregon. Besides his wife, Roy was preceded in death by his parents, a brother Rick Blackwell, daughter in law Judy Patete and grandchildren Lawrence Edward, Christopher Alan, Ashly Lauren and Sydney Marie. Funeral services for Roy will be held at 10:30 am on Friday, January 20, 2017 in the sanctuary of the Meadowcreek United Methodist Church in Collinsville with Pastor Brian Mangan officiating. Roy will be laid to rest next to his wife at the Graceland Memorial Park Cemetery, Owasso. Visitation for Roy was held on Thursday, January 19th from 9:00 am to 8:00 pm at Mowery Funeral Service in Owasso. The family entrusted Mowery Funeral Service with the arrangements. www.moweryfs.com'

' Roy Lee Blackwell, Jr., resident of Collinsville, passed from this life on Tuesday, January 17, 2017 in Tulsa. He was 81 years of age. Roy was born January 11, 1936 in Chicago, IL to Roy Lee and Irene (Lockhart) Blackwell, SR. He was raised... View Obituary & Service Information

The family of Roy L. Blackwell, Jr. created this Life Tributes page to make it easy to share your memories.