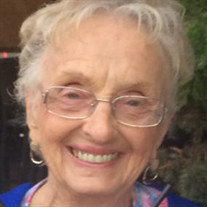 Ruth Naomi Martin “Punkie” Pavey Passed from this world on Thursday, January 30, at the age of 89. She is survived by her four children—Carol McConahy and her husband Mike of Fairbanks, Alaska, Bruce Pavey and his wife Seretha of Oologah, Oklahoma, Colleene Wincele and her husband Eric of Lake Forest, California, and Rocky Pavey and wife Catherine of Fairbanks, Alaska; grandsons Zachary McConahy of Albany, Oregon, Marshall McConahy of Fairbanks, Alaska, Tucker Wincele of Lake Forest, California, Tate Wincele of Lake Forest, California; granddaughter Sarah Pavey of Tulsa, Oklahoma; and great grandchildren Benjamin and Alexandria. She is preceded in death by her grandson David Hutchens of Fairbanks, Alaska, seven sisters, and three brothers. “Punkie” Martin was born in Collinsville, Oklahoma on September 5, 1930, to James and Emma Martin. She grew up there, graduating from Collinsville High School in 1948. In 1951 she married Marion “Beak” Pavey, and for the next forty years traveled with him as he pursued his occupation as a pipeline welder, though the Collinsville area remained their “home base.” In 1975 they moved to Alaska to work on the Alyeska Pipeline, and Punkie remained in Alaska after their divorce in 1992. A long-time employee at Hops Stationary, after her retirement she spent several years working in customer service at son Rocky’s heating service, and remained a vibrant and active force of nature until her sudden and unexpected death. She enjoyed square dancing, and was an accomplished quilter, winning a blue ribbon at the Alaska State Fair. She loved baking pies and other goodies, and gifting them to friends, neighbors, and sometimes total strangers, “just because.” She was a woman of gentle grace and humility yet possessed a quiet inner strength that allowed her to raise four children while coping with the often unsettled lifestyle of a pipeliner’s wife. She was an anchor of constance and stability for her family, and did her best to make every stop along the way feel like home. She was too humble a person to recognize how people were drawn to her, and how many, many lives were touched by her kind and gentle nature during her time on this earth. She was loved, and will be missed, by all who were fortunate enough to have known her. Funeral services will be held at Mowery’s Funeral Home in Owasso, Oklahoma, on Saturday, February 8. The family has asked that in lieu of flowers, donations be made to St. Jude’s Children’s Hospital in honor of her nephew who died from childhood cancer. The link to his brother’s (Dale Peay) fundraising page is below. [link] https://fundraising.stjude.org/site/TR;jsessionid=00000000.app20047b?px=4847032&pg=personal&fr_id=121077&NONCE_TOKEN=88006F63CAC76DA2F7004C27EB532CB9

Ruth Naomi Martin &#8220;Punkie&#8221; Pavey Passed from this world on Thursday, January 30, at the age of 89. She is survived by her four children&#8212;Carol McConahy and her husband Mike of Fairbanks, Alaska, Bruce Pavey and his wife... View Obituary & Service Information

The family of Ruth Naomi Martin "Punkie" Pavey created this Life Tributes page to make it easy to share your memories.

Send flowers to the Pavey family.