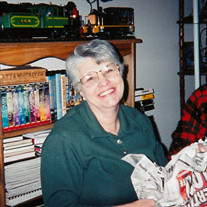 Ruth Ann Stuckey was born July 20, 1945, in Neodesha, Kansas, to Joel Estes and Bootsie Shue Barnett. She died Saturday, December 23, 2018, in Tulsa, Oklahoma, at the age of 73 years. Ruth completed her secondary education in Neosho, Missouri, and graduated with the Neosho High School Class of 1963. She was married November 6, 1964, in Neosho to Ronald Stuckey. After moving to Owasso, Oklahoma, Ruth spent 18 years caring for children at Little People’s Land. Most important was her time spent caring for her family. She was also an active member of Blue Star Mothers. Those she leaves behind who hold many cherished memories include: Her husband; Ron, of the home Three children; Mark Stuckey and wife Sherri, of Skiatook, Oklahoma Gary Stuckey, of Owasso, and Barbara Jo Griffith, of Owasso Three grandchildren; Kaitlin Stuckey, Madison Stuckey, and Joie Griffith Great grandson; Kacen Sheperd She was preceded in death by her parents, Joe and Bootsie Barnett, sister, Betty Jo Wehmer, and son-in-law, Jeff Griffith. Ruth will be laid to rest at Graceland Memorial Park Cemetery in Owasso. Arrangements and services were entrusted to Mowery Funeral Service of Owasso. www.moweryfs.com

The family of Ruth Ann Stuckey created this Life Tributes page to make it easy to share your memories.

Send flowers to the Stuckey family.