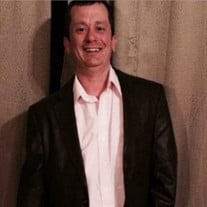 Ryan Michael Cason was born July 28, 1981, in Freeport, Texas, to Donald Ray and Carol Ann Martin Cason. He died Tuesday, June 15, 2021, in Owasso, Oklahoma, at the age of 39. Ryan moved with his family to Oklahoma, where he completed his secondary education graduating with the Owasso High School Class of 1999. He spent most of his working life in construction and as an electrician apprentice. To say Ryan enjoyed the outdoors is an understatement. He enjoyed a variety of pastimes, especially fishing and camping. He was happiest when he was throwing out a line and pulling in a large bass. He had recently purchased a Harley-Davidson motorcycle and loved the open-air rides. He enjoyed time spent at the beach surfing and he was also a certified scuba diver. Ryan loved to laugh and joke with his friends, but most of all was loyal to his friends and his family. He looked forward to every Christmas when his grandmother would come and visit. They would make fudge from his grandfather’s recipe, who had taught him how to make it. Ryan was deeply loved by his family, and then there was his deep love for his brother, Seth. He was loved by his church family at Hope Chapel in Owasso. He always dreamed and talked about going on a missions trip to Peru with his mom and dad. He had given his life to Jesus Christ at an early age and when he was baptized he made a profound statement, “Jesus is in my heart, and I will never let him out”. That is a promise that his Lord made true when he said, “I will never leave you or forsake you”. Today, he is living in the land of his inheritance, a place where he was received by all and by Christ our Lord. Ryan is and will be missed. Those he leaves behind who hold many cherished memories include: His parents; Don and Carol Cason Brother and sister-in-law; Seth and Amanda Cason Nephews; Blake Walker and Drake Graham Uncle; David Martin Aunts; Mary Healey, Teresa Tipp, and Elizabeth Cooper Cousins; Jacob Singleton, Amanda Singleton, Amber Howard, Laura Hargrave, Stephanie McGinnis, Nicholas Tipp, Kylie Cooper, and Ethan Cooper Memorial service will be held 10:00 a.m. Saturday, June 26, 2021, at Hope Chapel in Owasso with pastor Cere Muscarella and Pastor Andrew Rankin officiating. Private family disposition will be held at a later date. The family requests memorial contributions be made in Ryan’s memory to Hope Chapel Foursquare Missions, P.O. Box 735, Owasso, Oklahoma, 74055. Arrangements and services were entrusted to Mowery Funeral Service of Owasso. www.moweryfs.com

Ryan Michael Cason was born July 28, 1981, in Freeport, Texas, to Donald Ray and Carol Ann Martin Cason. He died Tuesday, June 15, 2021, in Owasso, Oklahoma, at the age of 39. Ryan moved with his family to Oklahoma, where he completed his... View Obituary & Service Information

The family of Ryan Cason created this Life Tributes page to make it easy to share your memories.

Send flowers to the Cason family.