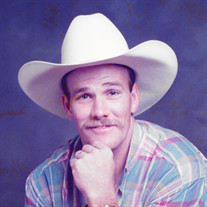 Scottie Lynn Hendricks was born July 9, 1958, in Tahlequah, Oklahoma, to Thomas Junior Hendricks and Wanda Louise Sanderson. He died Thursday, February 27, 2020, in Talala, Oklahoma, at the age of 61 years. Scott completed his education at Edison High School in Tulsa, Oklahoma, then began his working career in construction. He began working at a young age as a plumber. He was married May 9, 1987, in Turley, Oklahoma, to Robin Williams. They spent most of their life as residents in the Talala area. Scott was a faithful member of First Baptist Church of Talala as well as a member of the Plumbers and Pipefitters Union Local #430. He loved the country and living the cowboy life. He loved fishing and going to the lake with his friends. He enjoyed participating and spending time rodeoing. He was an avid football fan, particularly for the Oklahoma Sooners. Those he leaves behind who hold many cherished memories include: His wife; Robin of the home Daughters; Regan Morgans and husband Justin, of Claremore, Oklahoma Sarah Roberts and husband Ryan, of Collinsville, Oklahoma Grandchildren; Jada, Jaxon, and Jett Morgans Meagan Beier, and Hunter Tice Sisters; Kathy Mock and husband Brett Velma Williams Dianne Harris Sister-in-law; Kim Adcock and husband Burke Brother-in-law; Paul Williams and wife Rhonda His children; Scotty Hendricks and Alicia Tice And a host of nieces, nephews, and other relatives and friends He was preceded in death by his parents, and brothers, Tommy Hendricks, Billy Hendricks, and Roger Hendricks. Visitation will be held from 2:00 p.m. to 5:00 p.m. Sunday March 1, 2020, at Mowery Funeral Service in Owasso. Funeral service will be held 10:30 a.m. Monday, at the First Baptist Church of Talala with Pastor Lester Orwig officiating. Serving as casket bearers will be Steve Gann, Jerry LaValley, Davis Wesson, Jerry Wright, Mike Rice, and Charlie Bliss. Honorary casket bearers will be Johnny Crutchfield, Ron Chambliss, John Bowzer, Rick Bowzer, and Scotty Bowzer. Committal service and interment will follow at Fairview Cemetery in Talala. The family requests memorial contributions be made to The ALS Association-Oklahoma Chapter, P.O. Box 14482, Tulsa, Oklahoma, 74159. Arrangements and services were entrusted to Mowery Funeral Service of Owasso. www.moweryfs.com

The family of Scottie Lynn Hendricks created this Life Tributes page to make it easy to share your memories.

Send flowers to the Hendricks family.