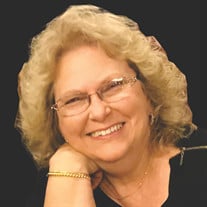 Sharon Gale Gardner was born September 17, 1948, in Independence, Missouri, to William James and Ruth Nadine Martin Kendrick. She died Wednesday, December 25, 2019, in Owasso, Oklahoma, at the age of 71 years. Sharon attended school at Truman High School in Independence. She was married at the young age of 16 years in a little church on December 18, 1964, in Rosedale, Kansas, to Dennis Gardner. Their first child was a son they named Dennis, born June 29, 1966. Their second child, also a son, Damon was born November 27, 1970. When they were married, Dennis worked as a subcontractor in the home building industry. She and Dennis later owned and operated nursing homes. The change in their lives occurred in 1979 when they moved to Oklahoma to the small town of Owasso where they worked in the oil industry. Later together, they opened a print and sign shop, Hot Off The Press in Tulsa. They worked side by side for over 55 years. Their oldest son, Dennis, played baseball for the Owasso Rams, which started their love for sports. Damon also played baseball for Owasso and pitched for the Owasso Rams State Championship baseball team of 1987. Sharon’s oldest grandson, Drake, played for the Owasso Rams team that won the Class 6A State Championship in 2013, and grandson Drew played for the State Championship team of 2015. Owasso sports and athletics were always a big part of her life. Her oldest granddaughter, Danielle played on the 2008 Owasso Volleyball State Championship team. Her youngest granddaughter, Taylor, was part of the Owasso High School Cheerleaders that won the State Championship of 2017. Dax and Dylan are currently playing baseball and her great grandson, Dodson, is sure to follow in their tradition. Her love for her daughters-in-law, Trina and Tiffany, was unending. She enjoyed a variety of pastimes including cooking, but her biggest joy was to have all the family over for the holidays. She especially enjoyed her role of Mimi. If we were to put things in order of her life, it would be her church, her husband, Dennis, her grandkids and great grandson, her two boys and their wives. It would be easily said, her family was her life. Those she leaves behind who hold many cherished memories include: Her husband of over 55 years; Dennis, of the home Two sons; Dennis Gardner and wife Trina, of Owasso Damon Gardner and wife Tiffany, of Owasso Grandchildren; Danielle Gardner and fiancé Matthew Hardin, of Oklahoma City Drake Gardner and wife Haley, of Little Elm, Texas Drew Gardner Taylor Gardner Dax Gardner Dylan Gardner Great grandson; Dodson Gardner Two sisters; Debbie Rockers and Edwinna Clutter She was preceded in death by her parents, sister, Gwen Stewart, and brother, Gerald Kendrick. Visitation will be held from 5:00 p.m. to 8:00 p.m. Thursday, January 2, 2020, at Mowery Funeral Service in Owasso. Funeral service will be held at 10:00 a.m. Friday, January 3, 2020, at Friendship Baptist Church in Owasso with Pastor Linzy Slayden officiating. Serving as casket bearers will be Drake Gardner, Drew Gardner, Dax Gardner, Dylan Gardner, Matthew Hardin, and Eric Murr. Committal service and interment will follow at Memorial Park Cemetery in Tulsa, Oklahoma. The family requests memorial contributions be made to Owasso Ram Baseball Boosters, P.O. Box 1011, Owasso, Oklahoma, 74055, or Friendship Baptist Church, 14100 East 86th Street North, Owasso, Oklahoma, 74055. Arrangements and services were entrusted to Mowery Funeral Service of Owasso. www.moweryfs.com

The family of Sharon Gale Gardner created this Life Tributes page to make it easy to share your memories.

Send flowers to the Gardner family.