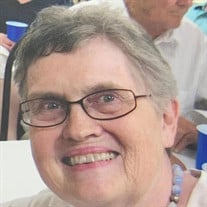 Sharon Lee Kriewall was born May 22, 1937, in Detroit, Michigan, to Gordon James and Margaret Jackman Clancey. She died Wednesday, May 19, 2021, in Claremore, Oklahoma, at the age of 83 years. Sharon was reared and educated in Detroit, Michigan, then attended Wayne State University in Detroit where she earned her bachelor’s degree in chemistry. She continued her education at the University of Missouri-St. Louis earning her master’s degree in secondary education. Sharon was married June 20, 1959, in Detroit, Michigan, to Arthur Albert Kriewall. She spent her early working years as a chemistry teacher at Duchesne High School in St. Charles, Missouri, where she also coached women’s volleyball. She courageously battled Non-Hodgkins Lymphoma since being diagnosed in 1993. She was so strong, that she never missed a single day of teaching while going through chemotherapy. She was a loving wife and mother, spending much of her time caring for her family. She was a faithful member of Hope Lutheran Church in St. Ann, Missouri, then after moving to Owasso, Oklahoma, was involved with Faith Lutheran Church. She enjoyed a variety of pastimes, but was especially talented making crafts and gifts. She did knitting, crocheting, needlepoint, and could make just about anything. Those she leaves behind who hold many cherished memories include: Children; Kevin Kriewall and wife Cheryl, of Claremore, Oklahoma Randy Kriewall, of St. Louis, Missouri Katie Langelier and husband Ernie, of Grand Junction, Colorado Grandchildren; Kalise Kriewall, of Oklahoma City, Oklahoma Caitlin Kriewall and husband Moshen, of Atascadero, California She was preceded in death by her parents, her husband, Art Kriewall, brother, Patrick Clancey, and sister, Colleen Clancey. Memorial service will be planned in Harbor Beach, Michigan, with interment at Marquart Cemetery in Port Hope, Michigan. The family requests memorial contributions be made the Alzheimer’s Association, 2448 East 81st Street, Suite #3000, Tulsa, Oklahoma, 74137, www.alz.org . Arrangements and services were entrusted to Mowery Funeral Service of Owasso, Oklahoma. www.moweryfs.com

Sharon Lee Kriewall was born May 22, 1937, in Detroit, Michigan, to Gordon James and Margaret Jackman Clancey. She died Wednesday, May 19, 2021, in Claremore, Oklahoma, at the age of 83 years. Sharon was reared and educated in Detroit, Michigan,... View Obituary & Service Information

The family of Sharon Lee Kriewall created this Life Tributes page to make it easy to share your memories.

Send flowers to the Kriewall family.