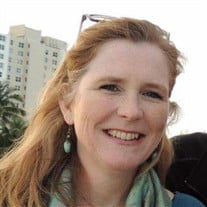 Shelley Lynne Stringer was born March 1, 1964, in Oakville, Ontario, Canada, to Donald Wayne and Sheila Joan (Anderson) Campbell. She died Tuesday, November 20, 2018, in Oologah, Oklahoma, at the age of 54 years. Shelley completed her secondary education in Woodstock, Ontario, Canada and graduated from Woodstock Collegiate Institute in 1984. She continued her education at Oral Roberts University in Tulsa, Oklahoma, where she received her Bachelor of Science degree in Psychology and then earned her Master’s degree in Public Health Administration from the University of Oklahoma. Shelley most recently worked as Vice President of Operations with Advanced Hydrocarbon Stratigraphy (AHS) in Tulsa as well as a realtor with Keller Williams in Owasso. Strong in her faith, Shelley was an active member with Church on the Move in Tulsa, and Harbor Church in Oologah, Oklahoma. She loved helping young people, especially as a leader with the Boy Scouts of America and was instrumental in helping several young people achieve the rank of Eagle Scout. Those she leaves behind who hold many cherished memories include: Three sons; Will Stringer and his wife Adriana, of Washington D.C. Luke Stringer, of New Haven, Connecticut Cole Stringer, of Oologah, Oklahoma Her parents; Wayne and Sheila Campbell, of Woodstock, Ontario Sister and brother-in-law; Allison and Matt Denmark, of Jacksonville, Florida Brother and sister-in-law; Ian and Kristen Campbell, of McKinney, Texas Her nieces, Abby, Jordan and Carys and her nephews, Caleb and Joseph and one great-niece, bearing Shelley’s name Her sons’ father Bill Stringer and his wife Ruth, and in-laws Brad and Sheila Stringer, all from Owasso, Oklahoma The family will greet friends at the Mowery Funeral Service Chapel from 5:00 p.m. to 8:00 p.m. Friday, December 14, 2018, in Owasso. Shelley’s celebration of life and memorial service will be held 2:00 p.m. Saturday, December 15, 2018, at the Oologah High School Auditorium with Pastor Ian Wilson officiating. In lieu of flowers, the family is requesting that donations be made to the Shelley Stringer Servant Leader Scholarship Fund, that will focus on helping Oologah, high school graduates. gofundme.com/shelley-stringer-servant-leader-award Arrangements and services were entrusted to Mowery Funeral Service, 9110 N. Garnett Road, Owasso, OK 74055. www.moweryfs.com

The family of Shelley Lynne Stringer created this Life Tributes page to make it easy to share your memories.

Send flowers to the Stringer family.