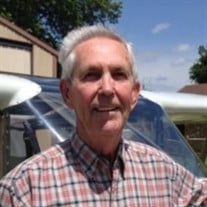 Sherrod Lynn Coltharp was born December 10, 1940, in either Terrell, Texas, or Hobbs, New Mexico, depending on who you ask. He passed away peacefully April 27, 2020, in Owasso, Oklahoma, at the age of 79, with his wife of 57 years, Sallie Ann Bantz Coltharp, at his side. He is survived by his wife; two children; Richard Coltharp of Las Cruces, New Mexico, and Christy Coltharp Smith (Chad) of Jenks, Oklahoma; four grandchildren: Jessica Grisak (Tyler) of El Paso, Texas, George Ryan, of Tulsa, Oklahoma, Kyla Ryan, of Flagstaff, Arizona, and Avalon Coltharp of Las Cruces, New Mexico; and a niece, Kelly Coltharp Gillham (Lou), of Fort Worth, Texas. He was preceded in death by his parents, Kary and Frankie Coltharp, and a brother, Don Coltharp. Sherrod Lynn Coltharp grew up in Fort Worth and graduated from Polytechnic High School in 1959. After attending Texas Institute of Technology, he embarked on a long career in petroleum technology, and retired early from Amoco/BP in 1999. He moved his family to Tulsa in 1969, then to Owasso, Oklahoma, in 1983, where he lived until his death. He earned his private pilot’s license in 1975, and flying remained his passion. He built two airplanes during his lifetime, a VariEze, which he first flew in 1981, and a Rans Coyote, which he first flew in 2007. His career took him all over the world. He found business and/or pleasure in places such as Great Britain’s North Sea, Alaska, Japan, and the Great Pyramids, of Egypt. He visited 49 of the 50 states, passing up several chances to go to Hawaii (“Why in the world would I want to go hang out on a beach?”) He loved family, friends, dogs, and the occasional barley- or agave-based beverage. He enjoyed a few things more after a long day of work and play than sitting in front of the hanger in his backyard of an evening, often after a home-grilled dinner, relaxing with family and friends, watching the unpredictable Oklahoma weather put on its nightly show. Lynn was a fan of Dallas Cowboys football and Oklahoma City Thunder basketball, but only went out to the movie theater once in his adult life. Over the years, he was a longtime member of, and held several volunteer positions with, the Experimental Aircraft Association Chapter 10 and the First United Methodist Church of Owasso. Upon his retirement, he spent several years volunteering with the AARP, helping others do their taxes. He was also a longtime member of two area social groups, the Beer Group and the Friday Group. In the past dozen years, he had overcome two cancers, bladder and prostate, and had three heart surgeries. He passed away with complications of Parkinson’s Disease and heart failure. Visitation will be held from 4:00 p.m. to 8:00 p.m. Wednesday, April 29, 2020, at Mowery Funeral Service in Owasso. His life will be remembered in a small family service Thursday, April 30, 2020, with Pastor Jim Cinocca of First United Methodist Church in Owasso officiating. Final resting place will be at Floral Haven Memorial Gardens, in Broken Arrow, Oklahoma. The family hopes to host a larger Celebration of Life service later in the year. They also request memorial contributions be made to your favorite charity. Arrangements and services were entrusted to Mowery Funeral Service of Owasso. www.moweryfs.com

Sherrod Lynn Coltharp was born December 10, 1940, in either Terrell, Texas, or Hobbs, New Mexico, depending on who you ask. He passed away peacefully April 27, 2020, in Owasso, Oklahoma, at the age of 79, with his wife of 57 years, Sallie Ann... View Obituary & Service Information

The family of Sherrod Lynn Coltharp created this Life Tributes page to make it easy to share your memories.

Send flowers to the Coltharp family.