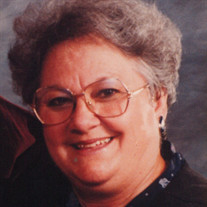 Shirley Ann Stotts was born March 11, 1940, in Muskogee, Oklahoma, to John Morris Edwards and Gracie Mae (Gamblin) Edwards. She was raised and educated in Morris, Oklahoma where she completed the sixth grade and then moved to Tulsa and continued her education. She earned her GED through Owasso High School later in life and went on to attend art classes at Rogers State University. Shirley was married October 30, 1954, in Sapulpa, Oklahoma to Delwin Lee Stotts. She spent most of her working life as a technician for Lowrance Electronics in Tulsa. She was a faithful member of First Church in Owasso since about 1985, up until her health began to interfere with her attendance. She enjoyed a variety of pastimes such as metal detecting with Del, drawing and painting, fishing, attending her children’s sporting events, eating big holiday meals, and studying genealogy, but most of all she loved her family. Those she leaves behind who hold many cherished memories include: 4 Children; Jim Stotts, of Owasso Debbie Bollinger and husband Wayne, of Owasso Bo Stotts and wife Lisa, of Skiatook Paula Rowan and husband Terry, of Owasso 9 Grandchildren and 3 Great Grandchildren 3 Sisters; Virginia Johnson, of Broken Arrow Edna Griffin, of Broken Arrow Verna Gay, Coos Bay, Oregon Brother; Harold Edwards, of Leeland, North Carolina She was preceded in death by her parents, John and Gracie, son, Daniel, husband, Del, brother, Gene, and sister, Vera. Visitation will be held from 4:00 p.m. to 8:00 p.m. Wednesday, October 24, 2018, at Mowery Funeral Service in Owasso. Funeral service will be held 10:00 a.m. Thursday, October 25, 2018, at First Church in Owasso with Pastor Ben Killion officiating. Final resting place will be at Memorial Park Cemetery in Tulsa, Oklahoma. Arrangements and services were entrusted to Mowery Funeral Service of Owasso. www.moweryfs.com

Shirley Ann Stotts was born March 11, 1940, in Muskogee, Oklahoma, to John Morris Edwards and Gracie Mae (Gamblin) Edwards. She was raised and educated in Morris, Oklahoma where she completed the sixth grade and then moved to Tulsa and continued... View Obituary & Service Information

The family of Shirley Ann Stotts created this Life Tributes page to make it easy to share your memories.

Send flowers to the Stotts family.