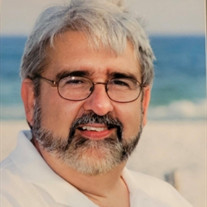 Stephen Carl Alleman was born on July 1, 1949. He left his earthly body, and all whom he loved here on earth, to abide forever with his heavenly Father on July 6, 2021. Just one month after he was born (the third of eight children), Steve’s parents moved from Bartlesville, Oklahoma, to Cactus, Texas, and it was there that he attended elementary school through the 5th grade. After returning to Oklahoma in 1959, he attended Bartlesville’s McKinley Grade School and Central Junior High School, graduating from College High School in 1967. Steve grew up in a loving, religious home, and was as intelligent as he was mischievous (which earned his Mother’s affectionate, childhood-moniker of “Stinky Stephen”). All who knew Steve enjoyed his dry wit, sense of humor, and selfless giving of time to “be there” and “show up” for his family and friends in times of need. His childhood life in both Cactus and Bartlesville was very much the all-American small town dream--by his own accounting. Steve attended Northeastern State University in Tahlequah, Oklahoma, where in 1971 he obtained a Bachelor of Science degree in Business Administration, with a double major in Economics. After college Steve began his long-term career at Phillips Petroleum Company (now ConocoPhillips), specializing in the natural gas business, while also serving in the Army National Guard in Sulphur, Oklahoma (1971 - 1973), and in Bartlesville’s Army Reserves (1973 – 1977). As a result of his expertise in the field of liquid natural gas (“LNG”), Steve served in several LNG positions at Phillips (from 1972 to 2004) and was assigned key managerial roles in multiple cities around the world, including: Midland, Texas; Houston, Texas; Anchorage, Alaska; Dublin Ireland; and Woking, England. He retired from ConocoPhillips in 2004, while serving as Manager of Business Optimization, Commercial Gas, and Power. Steve married in college (1970) and had two wonderful daughters, Stephanie and Michelle. In 1983 Steve married Teresa Snow, who brought two equally wonderful daughters to the marriage, Amy and April, both of whom were adopted into Steve’s heart and family in 1983. At the time of his death, Steve and Teresa had been married for 37 years. For over a decade, they served as a hub in maintaining family ties for his extended family by hosting annual Thanksgiving dinners at their Tulsa home for, on average, fifty-plus relatives. Steve’s retirement allowed him to enjoy and concentrate on being a loving father to his girls, a grandfather to his granddaughter, LeeAnn, and to his three grandsons: Riley, Eli, and Brodey. He unconditionally loved his family and the life they shared. As well, Steve spent a great deal of his time expressing his love for Jesus through his passionate work with International Community Outreach and his relationships with the International Students. He was a member of Fellowship Bible Church. Steve is survived by his beloved wife and best friend, Teresa Alleman, his daughters: Stephanie Brace, husband Ray, and her sons Riley and Eli Stackenwalt; Michelle Eaton, husband Trenton, and son Brodey Ward; Amy Alleman and Christopher Kuehnert; and, April Alleman, and daughter LeeAnn Laub. Steve’s siblings: Karen Giddens; Lois Kolb and husband Chuck; James Alleman and wife Kim; David Alleman and wife Melodie; Carol Enix and husband Byron; and Brenda Zellmer and husband Matthew; along with a huge host of nieces and nephews and extended family.

Stephen Carl Alleman was born on July 1, 1949. He left his earthly body, and all whom he loved here on earth, to abide forever with his heavenly Father on July 6, 2021. Just one month after he was born (the third of eight children), Steve&#8217;s... View Obituary & Service Information

The family of Stephen Carl Alleman created this Life Tributes page to make it easy to share your memories.

Send flowers to the Alleman family.