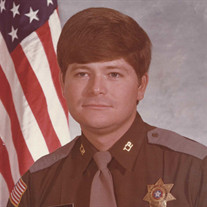 Steven “Steve” Edison Raiford was born on November 10, 1947, in Chouteau, Oklahoma to Felix Edison Raiford and Dorothy Jean (Brady) Raiford. He passed from this life on Tuesday, November 2, 2021, in Tulsa, Oklahoma at the age of 74 years. Steve was raised and educated in Tulsa, Oklahoma and graduated with the Nathan Hale High School Class of 1966. He then enlisted and served his country honorably in the United States Air Force 41st Division during a tour of Vietnam. Steve was married on October 27, 1971, in Tulsa to Mary Leonis (Scott) Raiford. He began his career in law enforcement with the Tulsa Police Department in 1972 and earned his bachelor’s degree in Criminal Justice from Northeastern State University in Tahlequah, Oklahoma in 1977 while working as a patrolman. Steve worked his way through the department and worked in the Major Crimes division as a homicide detective. He spent the final 15 years of his career working Airport Security at Tulsa International and retired from the Tulsa Police Department after 40 years. Steve enjoyed a variety of past times such as fishing, running, raising cattle and taking care of all animals. Those he leaves behind who hold many cherished memories include: His Wife; Mary Raiford Daughter; Christy Gill and Elwyn 3 Grandchildren; Caris Shamp, Bekah Sanell, and Josh Shamp Sister; Carole Brandl and husband John Uncle; David Brady and wife Veronica He was preceded in death by his parents, Felix and Dorothy, and two sons, Jason and Jeremy. Visitation will be held from 2:00 p.m. to 4:00 p.m. on Sunday, November 7, 2021, at Mowery Funeral Service in Owasso. Funeral service will be held 1:00 p.m. on Monday, November 8, 2021, at the Hilldale Baptist Church in Claremore, Oklahoma with Pastor Scotty Titsworth officiating. Interment will follow at Memorial Park Cemetery in Tulsa, Oklahoma.

Steven &#8220;Steve&#8221; Edison Raiford was born on November 10, 1947, in Chouteau, Oklahoma to Felix Edison Raiford and Dorothy Jean (Brady) Raiford. He passed from this life on Tuesday, November 2, 2021, in Tulsa, Oklahoma at the age of... View Obituary & Service Information

The family of Steven "Steve" Edison Raiford created this Life Tributes page to make it easy to share your memories.

Send flowers to the Raiford family.