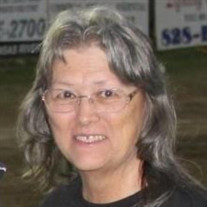 Susan Maria Killgore was born December 15, 1948, in Tulsa, Oklahoma, to Johnnie Paul and Patsy Pauline Pilant Mathias. She died Sunday, May 30, 2021, in Owasso, Oklahoma, at the age of 72 years. Susan was reared and educated in Jenks, Oklahoma, and was a graduate of Jenks High School. She excelled on the Jenks girls basketball team and was selected as an All-State basketball player. She was married November 24, 1979, in Tulsa to Ronald Killgore. Susan spent most of her working life as a contract specialist with the U.S. Army Corp of Engineers. She prepared managed contractual work for Tinker Air Force Base in Oklahoma City as well as for many the state lakes in Oklahoma. She enjoyed a variety of pastimes including spending time in her garden, sewing, and painting ceramics. She especially loved going to the racetrack and watching the races. She had made her home in Owasso, Oklahoma, since 2017 to be close to her family. Those she leaves behind who hold many cherished memories include: Her daughter and son-in-law; Tina and Harlan Hulsey, of Owasso, Oklahoma Grandchildren; Kacee Frazier and fiancé Terry Easum, of Broken Arrow, Oklahoma Ty Hulsey and girlfriend Taylor Garrison, of Owasso, Oklahoma Angela Kehmeier and husband Eric, of Broken Arrow, Oklahoma Andrew Hulsey, of Broken Arrow, Oklahoma Great grandchildren; Vivian Kehmeier and Georgia Keimeier Tucker Hulsey Brother and sister-in-law; Brian and Margaret Mathias, of Inola, Oklahoma Pam Wellman, of Owasso, Oklahoma She was preceded in death by her parents, her husband, Ron Killgore, and brother, Jimmy Mathias. Visitation will be held from 4:00 p.m. to 8:00 p.m. Thursday, June 3, 2021, at Mowery Funeral Service in Owasso. Graveside service and interment will be held 2:00 p.m. Friday, June 4, 2021, at Graceland Memorial Park Cemetery in Owasso with Steve Cooper officiating. Serving as honorary casket bearers will be Harlan Hulsey, Ty Hulsey, Andrew Hulsey, and Terry Easum. Arrangements and services were entrusted to Mowery Funeral Service of Owasso. www.moweryfs.com

Susan Maria Killgore was born December 15, 1948, in Tulsa, Oklahoma, to Johnnie Paul and Patsy Pauline Pilant Mathias. She died Sunday, May 30, 2021, in Owasso, Oklahoma, at the age of 72 years. Susan was reared and educated in Jenks, Oklahoma,... View Obituary & Service Information

The family of Susan Maria Killgore created this Life Tributes page to make it easy to share your memories.

Send flowers to the Killgore family.