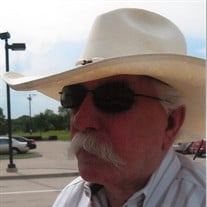 Terry DeWayne Bruner was born August 10, 1950, in Tulsa, Oklahoma, to Joseph William “J.W.” and Claudetta Coett Hand Bruner. He died Thursday, February 27, 2020, in Sperry, Oklahoma, at the age of 69 years. Terry completed his secondary education Owasso, Oklahoma, and graduated with the Owasso High School Class of 1969. He was a veteran of the armed forces having served his country honorably with the United States Army. He spent much of his working life as an industrial X-ray technician. He was married in Sperry, Oklahoma, to Alicia Rook. He was a member of Maranatha Baptist Church in Collinsville, Oklahoma. Terry was a licensed horse trainer and was well known throughout the area. He was also a “movie/tv star”, having appeared as an extra in both venues. Those he leaves behind include: His wife; Alicia Stepson; Mathew Toddy Grandchildren; Victoria, Gracie, and Alissa Toddy His sons; Dax Bruner and wife Linda, and Conor Bruner Grandchildren; Tristan, Jesston, and Tarryn Bruner Mother; Claudetta Bruner Sister; Coetta Kight He was preceded in death by his father, J.W. Bruner. Funeral service will be held 11:00 a.m. Thursday, March 5, 2020, at Friendship Baptist Church in Owasso with Pastor Linzy Slayden officiating. Arrangements and services were entrusted to Mowery Funeral Service of Owasso. www.moweryfs.com

The family of Terry DeWayne Bruner created this Life Tributes page to make it easy to share your memories.

Send flowers to the Bruner family.