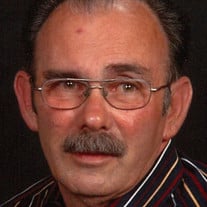 On July 10, 2019, Terry Lee Craig, at the age of 76, went to be with our Lord and Savior in Heaven. Terry was born on May 8, 1943 in Madison, Indiana to Otis Albert and Ruth Ellen Gibson Craig. He was the oldest of four children having younger twin brothers, Ricky and Dicky Craig and a baby sister, Karen Sue Craig Reinbold. Terry grew up in Madison, Indiana and graduated from Madison High School class of 1961. On June 15, 1963, he married Carolyn Sue (Susie) Loveall and they had two children, David Allen and Dawn Michelle who loved, admired and treasured their father. Terry began working as a switch tower operator for B&O railroad. However, he found an outlet for his creativity, ingenuity and strong work ethic in a life long career in construction. He excelled in every facet of home construction including having his own construction company as well as managing several home improvement stores. It is this career that moved the Craig family to follow a construction boom in Woodward, Oklahoma in the summer of 1980. Then in 1983 Terry took a department manager position at Mr. How Home Improvements in Bethany, Oklahoma and worked his way to store manager for Builder’s Square. It was Builder’s Square that prompted a move in early-1990s to Owasso and finally in the mid-1990s to their home in Broken Arrow. With the eventual closing of Builder’s Square, Terry transitioned back to his own construction company focusing on home repairs and remodels until recent health issues took its toll. Terry’s talent, creativity and artistic skills reached beyond his career in home design and into his hobbies. He made beautiful stained-glass art, created his own primitive firearms and well as designing and building HO scale model railroads. He also enjoyed cooking and gardening. Terry loved to study US history especially the Civil War and WWII eras and recently spent much time studying the expeditions of Lewis and Clark. He was also very interested in his family history. He and Susie took many vacations researching the genealogy of both of their family’s lineage. Terry loved to travel and spending time with his family. He took great joy in helping and teaching his two children, as well as others, his skills in building, creating, and design; leaving a legacy for future generations. He was known to many as a Jack of all Trades because of his vast knowledge and skill of so many things. Terry’s most loved hobby and life long leisure was fishing. This was a passion passed down from his grandfather, John Craig, as they spent many summers on the Ohio River in Indiana. This passion took him to rivers, streams, lakes, oceans all over the United States and Canada. Terry is proceeded in death by his parents, Otis and Ruth, is twin brothers, Ricky and Dicky, and his beloved wife, Susie. He is survived by his sister Karen and husband Charlie Reinbold of Jeffersonville, Indiana, son David and wife Beverly Craig of Macomb, Michigan, daughter Dawn and husband Joe Burris of Strang, Oklahoma, four grandchildren Shayla, Brandy, Cody and Shelby, eight great grandchildren, Gabbi, Angel, Brooklynn, Joseph, Chanler, Shevy, Kirden and Boogie, his first great, great grandbaby is on the way, and a very large extended family. Terry’s memorial service is under the direction of Mowery Funeral Service, 9110 N. Garnett Rd. Owasso, OK. The family welcomes guests to the viewing on Monday, July 15, from 4-8:00 pm and to the memorial service officiated by Rev. Ed Dowty on Tuesday, July 16, at 10:00 am in the Mowery Chapel followed by the grave side service at Graceland Memorial Park Cemetery in Owasso OK.

On July 10, 2019, Terry Lee Craig, at the age of 76, went to be with our Lord and Savior in Heaven. Terry was born on May 8, 1943 in Madison, Indiana to Otis Albert and Ruth Ellen Gibson Craig. He was the oldest of four children having younger... View Obituary & Service Information

The family of Terry Lee Craig created this Life Tributes page to make it easy to share your memories.

Send flowers to the Craig family.